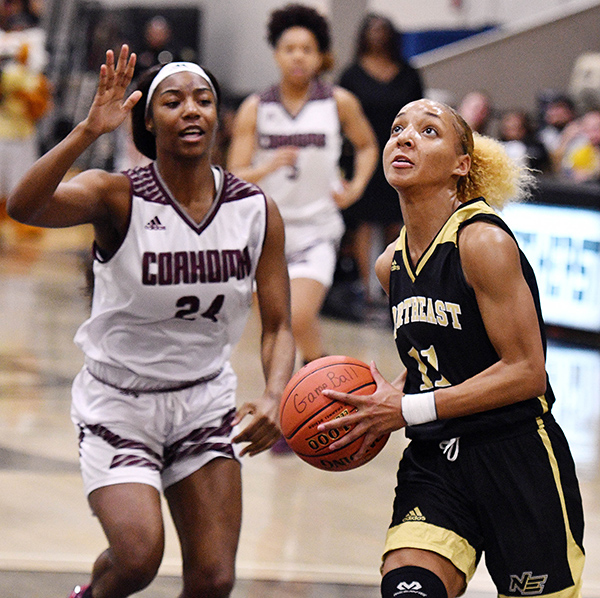 JACKSON — Dominique Caldwell finished her junior college basketball career by being ranked among the best players in Mississippi.

Caldwell collected second-team laurels as the primary point guard for the Lady Tigers. She started 15 games, played in 19, and led the team with 3.7 assists and 2.7 steals per game.

Caldwell also placed second on the team in scoring and rebounding. She finished her sophomore season at Northeast with averages of 8.1 points and 5.3 rebounds.

She scored a career-high 19 points against Northwest Mississippi in early January, and had a brilliant performance in Northeast’s win at Mississippi Delta Community College one week later with 16 points, six assists, six rebounds and six steals.

The 5-foot-6 guard averaged 6.8 points, 3.9 rebounds and 2.6 assists during her two-year career at Northeast Mississippi.

“Dominique led in a very different, but valuable aspect of the game and that was on defense,” Northeast Mississippi coach Brenda Mayes said. “Most importantly, she brought energy to the team.”

Newson secured first-team honors after leading the Lady Tigers in points and rebounds per game with 14.6 and 6.3, respectively. She reached double figures in 17 out of Northeast’s 22 games this season.

The Independence High School graduate scored 20-plus points five times this season, including a career-high 25 against Coahoma Community College.

Newson has committed to play at Rust College.

“Tekeria is a player who wants the basketball and it showed in her performance,” Mayes said. “She has a hunger to put the ball in the basket and the ability to knock down free throws.”

Winston eager to resurrect career with the Saints

NEW ORLEANS (AP) — The reeducation of Jameis Winston is beginning with the New Orleans Saints. For now, the 2013... read more