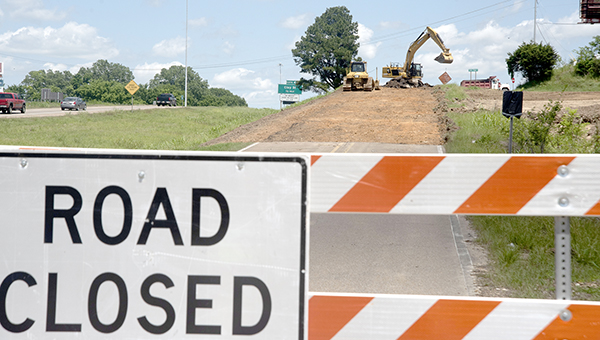 A portion of South Frontage Road near Porters Chapel Road is seen closed due to construction in Vicksburg. (Courtland Wells/The Vicksburg Post)

Mississippi Department of Transportation spokesman Mike Flood said the road was planned to be closed because of its tie-in with the reconstructed South Frontage Road. He said Porters Chapel is expected to be closed for a few months.

The estimated completion date for the entire project, he said, is early spring 2022, barring weather or any other unforeseen circumstances.

Once the project is completed, drivers using South Frontage Road to reach the businesses, restaurants and hotels on the road’s east side will take a slight jog to the west to cross the Kansas City Southern Railroad tracks.

The project to link the east and west sides of South Frontage Road involves building an overpass crossing the railroad tracks. There will be a slight shift in the road to get to the bridge because of the overpass being built south of the South Frontage Road-Old Mississippi 27 intersection.

In 2007, a Federal Highway Administration study on the project issued a “finding of no significant impact,” clearing the way for the project. Four years later, the Mississippi Department of Transportation bought five properties along the road to secure rights of way for the project, and in April 2014, the Legislature approved $4 million in its fiscal 2015 highway budget to begin planning the South Frontage Road expansion.

The Board of Mayor and Aldermen in April 2018 awarded a $1.576 million bid to relocate the utility lines along South Frontage Road to Hemphill Construction of Florence. That project was completed in June.

The Mississippi Transportation Commission in September awarded the project to T.L. Wallace, which submitted the low bid of $17.33 million for the project. The bid was more than $450,000 under the project’s estimate of $17.80 million.

Officials with Vicksburg Mall announce it will reopen Friday

The Vicksburg Mall will reopen Friday at 11 a.m. “We just needed to get the businesses open for the people... read more