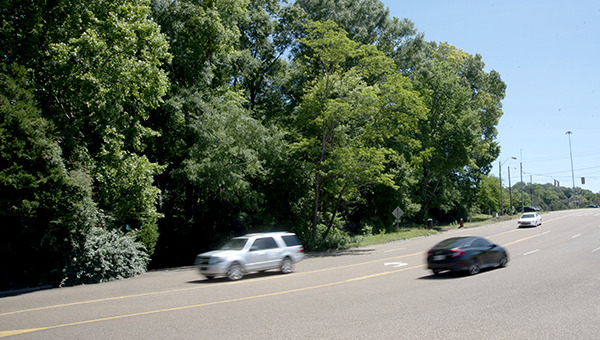 Vehicles pass by a section of wooded area near the intersection of Indiana Ave and Bugle Ridge Road in Vicksburg Friday. (Courtland Wells/The Vicksburg Post)

May 22, 1863, Union troops of the 13th Corps were located in an area south of the Confederate Army’s Railroad Redoubt and waited through a four-hour artillery barrage that heavily damaged the redoubt’s earthen fortifications.

More than 156 years later, a 1.87-acre section of that battle site was acquired by local attorney Mack Varner and donated to the Friends of the Vicksburg National Military Park and Campaign, which intends to preserve the site and protect it from commercial development.

The site is located at the corner of Indiana Avenue and North Frontage Road and backs up to the South Loop behind the Indiana monument, said Bess Averett, executive director of the Friends.

“As a single-residence property, it has been shielded from commercial development for decades, but its vacancy presented a new threat to future preservation, “ Everett said. “We have been working on acquiring this critical portion of the Vicksburg Battlefield for four years.”

She said Varner, a founding board member of the Friends of the Vicksburg National Military Park and Campaign who served as the organization’s president, “Came to us with a generous and welcome solution.

“He purchased the property and held it until we could secure funding for half of the value of the house through an NPS grant and then generously donated the remaining value of the property,” she said. “This important preservation would never have been possible without him.

“Mack came through as the hero for us. His donation was the equivalent of $140,000 and one of the largest we have received.”

The money for the house, Averett said, was made possible through a $144,812.50 National Park Service grant to the Mississippi Department of Archives and History with partner Friends of Vicksburg National Military Park and Campaign. The grant is part of a National Park Service allocation of $923,314 to protect historic American battlefields.

“This tract that Mack has donated is just one example of the kind of support that we get from the local community,” he said.

“We are preserving an important part of one of the most important events in American History. I am proud to be able to make this battlefield preservation possible,” Varner said.

“I love history and have always loved the amazing treasure we have here in Vicksburg with our park. Giving back to the community by preserving this hallowed ground is important to me.”

The Friends’ goal for the property, Averett said, is to preserve it. She said the house on the property will be used to house seasonal for rangers, interns and volunteers.

“Eventually, we will clear all of the structures from the property so it is natural and keep it as a preserved land, stopping further development,” she said.

“Our goal is to help the park in whatever way they need it and at this time they really do have a shortage of single housing and since the property has a house that’s in good condition, they asked if we could provide it as housing.”

She said three seasonal rangers are expected to move into the house in May.

“We’re just trying to limit commercial development on land that is adjacent to the park and significant battle land,” she said.

Be safe while walking, running and or biking

Everyone needs a little sunshine and fresh air even when there is no sheltering in place or social distancing orders.... read more