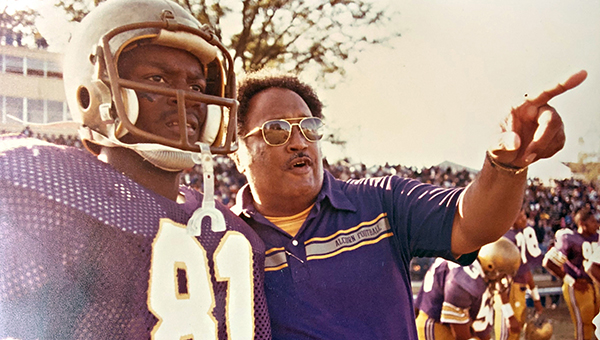 Former players remember Alcorn’s Casem as a hard, but fair and loving coach

There were plenty of times, when he was pushing them through a brutally difficult practice or running them into the ground to instill discipline, when Marino Casem’s players would curse his name.

A lot more often, especially when those lessons took root later in life, they would happily do anything he asked.

Casem, the former Alcorn State football coach affectionately known as “The Godfather,” died April 25 at his home in Baton Rouge. He was 85 years old. His former players remembered him as a man who was hard, but fair, and instilled lessons and character traits that have lasted a lifetime.

Casem will be buried Saturday at 11 a.m. in Baton Rouge. The service can be viewed via Facebook Live on the Southern University Facebook page. Casem was Southern’s athletics director and football coach after leaving Alcorn.

“Coach Casem was a fantastic coach, teacher and father figure. He taught us to be respectable young men. A lot of Vicksburgers went to Alcorn and played for Coach Casem,” said Alonzo Stevens, the former Vicksburg High football coach who played on the offensive line for Casem at Alcorn from 1970-74. “He was truly a legend. He earned the Godfather name in the way he did good things for his kids.”

Casem was the head coach at Alcorn State from 1964-85 — he also spent five years as an assistant before that — and his 132-65-8 is the best in the program’s history. He won seven Southwestern Athletic Conference championships and four Black college football national titles in three different decades.

Casem also was Alcorn’s athletics director for 20 years, and his name was added to the football stadium in 2011. Casem is a member of the SWAC, Alcorn, Mississippi and College Football Halls of Fame.

While the public saw the success on the field, however, his former players remembered the man who made it possible. They remembered Casem as a strict disciplinarian that they respected and loved. To many, he was a father figure who went above and beyond to help his players.

Vicksburg native William Wooley was Alcorn’s quarterback from 1971-74. After graduation, Casem gave him a graduate assistant position that helped launch a 40-year career as a football coach and teacher.

“He’ll do things to piss you off and make you want to kick him in the knee, but you don’t kick your mom or dad in the knee,” Wooley said.

Bennie Neal, another Vicksburg native, was a team manager at Alcorn from 1977-82. He said Casem took him under his wing as not just a manager, but an adopted son. Neal would often drive Casem to coaching clinics and meetings all over the South, and the two spent many hours talking about life as well as football.

“He had two Mercedes and a Cadillac. I was probably the only one on campus allowed to drive all three,” Neal said with a laugh.

Neal added that the bond the two formed lasted long after he left Alcorn.

“He and Miss Casem didn’t have any kids. He treated me like I was his son. He saw that you were trying and he would help you along,” Neal said. “He was a loving person. I lost my mom three years ago. Him and Miss Casem called me and they talked to me for an hour. I had tears running down my face, that they would do that.”

That personal touch and sense of fairness, Stevens said, helped create generations of people who were successful long after their football careers ended.

Stevens and Wooley were both coaches and teachers for more than 40 years. Neal has worked for Bank of New York Mellon for more than 30 years. Other former players went into business or teaching and had similar success, and a number of Casem’s assistant coaches had memorable careers of their own.

SWAC Hall of Famers Houston Markham and Cardell Jones were both assistants under Casem at one point.

“He had a saying that he was hard, but he was fair. When I look at my teammates all over America, he did it all. He gave us a trade,” Stevens said. “They all wanted us to be Class A-1 citizens, and that’s what I’m most thankful for. We’re going to miss him. The world is going to miss him. He was probably one of the greatest guys. I thank God that I went to Alcorn and Coach Casem was in my life.”

Major League Baseball might play games without fans this summer. It’s unclear when minor league baseball will come back. The... read more