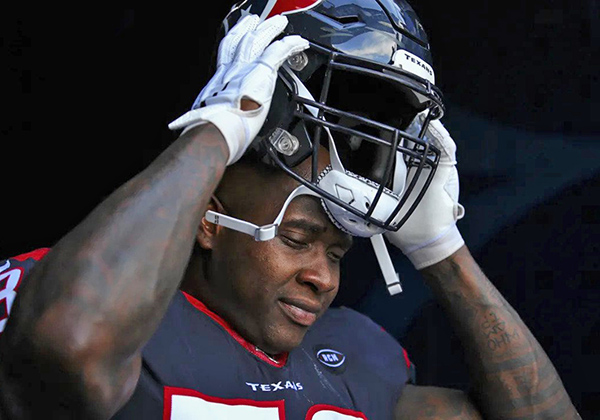 Houston Texans offensive tackle Laremy Tunsil, a former Ole Miss star, recently renegotiated his own contract without the help of an agent and became the highest-paid offensive lineman in the NFL. (Zach Tarrant/The Houston Texans)

HOUSTON (AP) — Laremy Tunsil became the NFL’s highest-paid offensive lineman by negotiating a $66 million contract extension with the Houston Texans without the help of an agent.

As he basks in his big payday, the 25-year-old left tackle hopes his unorthodox decision will start a trend in the league.

“Hopefully that will spark the minds of somebody else that they can do the deal on their own and not have an agent,” the former Ole Miss star said.

Everyone from Tunsil’s teammates and friends to family members were shocked that he completed his extension without an agent. But he knew it was the right decision for him.

“I felt like it was time to write my own destiny, if that makes sense, to put things in my own hands and to get it done,” he said. “You just have to bet on yourself, and that’s what I did and I got the deal done. I’m extremely proud of myself and the team.”

By negotiating his contract without an agent, Tunsil saved a substantial amount of money as agents typically take between 1 and 3 percent of the contract’s value as their fee.

While Tunsil did not have an agent, he did have advisers who helped him navigate the process. He also sought advice from Seattle’s five-time All-Pro linebacker Bobby Wagner, who negotiated a three-year, $54 million extension last year without an agent.

Tunsil had one year left on his contract that will pay him $10.35 million this season. The Texans acquired Tunsil and receiver Kenny Stills in a trade with Miami last August, shipping this year’s first-round pick and their picks in the first and second rounds in 2021 to the Dolphins.

In his first season in Houston, Tunsil’s presence helped the Texans cut their sacks total from an NFL-leading 62 in 2018 to 44. The 6-foot-5, 313-pounder was selected to his first Pro Bowl for his work in protecting quarterback Deshaun Watson’s blind side.

The extension includes a $13 million signing bonus and $50 million in guaranteed money. The deal meant even more to Tunsil because he likely lost out on millions of dollars in his first contract.

An incident stemming from his Twitter account being hacked on draft night caused him to tumble to the 13th pick in 2016.

The tweet, which was sent just before the draft, appeared to show him smoking marijuana while wearing a gas mask. Tunsil, who some projected to be the top overall pick that year, said at the time that it was him in the video, but that it was shot years ago and he does not have a drug problem.

“It’s a huge blessing, definitely coming from what happened on draft night and to be here now,” Tunsil said. “They tried to bury me, and I overcame that and I’m here now. To all those people who are actually going through adversity, never quit.”

Now that his deal is done, Tunsil is focused on preparing for the season. While all NFL facilities are closed due to the new coronavirus, Tunsil has been meeting up with Watson four times a week to work out and said he talks to his quarterback daily.

He’s excited about the possibilities for the Texans this season after they lost to the Kansas City Chiefs in the divisional round of the playoffs in January.

The Texans finished 10-6 and won the AFC South championship for the fourth time in five seasons in 2019. Tunsil allowed three sacks and was only called for one holding penalty all season.

Perhaps the only negative for Tunsil right now is that he won’t have DeAndre Hopkins around after the All-Pro receiver was traded to Arizona last month.

“We were all hurt from the Hop trade, especially because that was one of the guys that actually brought me under his wing when I came in,” he said. “I was hurt, but that’s just a part of the business that we currently work in and you really can’t do much about it.”