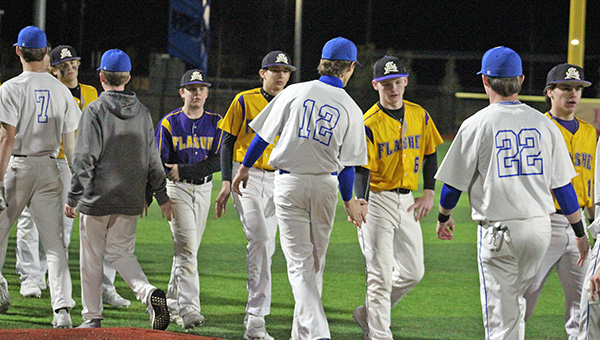 St. Aloysius and Porter’s Chapel Academy baseball players shake hands after a game in March. The MAIS canceled the rest of the spring sports season last week, but there are signs that other sports might soon emerge from their coronavirus-induced hibernation. (Ernest Bowker/The Vicksburg Post)

Sports column: Are we starting to see the light at the end of the COVID-19 tunnel?

The 2020 high school sports season officially ended and summer began this week, when the Mid-South Association of Independent Schools canceled the rest of its spring season because of the COVID-19 pandemic.

It was not an unexpected decision. The Mississippi High School Activities Association did the same thing for the state’s public schools two weeks ago. The MAIS decision always seemed a matter of when, not if.

There will be no 2020 state champions crowned in baseball, softball, track, golf or tennis. Seniors lost their last chance to compete just as the season was getting going, and underclassmen lost one of four precious years of competition.

It was a sad day, and yet as we’re closing the books on the 2020 season it feels for the first time in six weeks like there is light at the end of the coronavirus tunnel.

Ever since sports shut down in mid-March, pessimists have proclaimed — some almost disturbingly giddy as they did so — that there would not be sports of any kind for the foreseeable future. Not only would seasons be canceled in 2020, but in 2021 and perhaps even in 2022 as well.

Maybe it’s the first blast of nice spring weather. Maybe it’s just that two months of house arrest are all people can stand. Whatever it is, this past week has seemed to bring with it a burst of cautious optimism as government restrictions are carefully eased and long-term plans are slowly formulated.

The MHSAA and MAIS have both said they are proceeding as planned for the fall sports season, which includes beginning offseason workouts on June 1. The Vicksburg Warren School District has scheduled a full lineup of tryouts in June. The PGA Tour laid out a fall golf schedule jam-packed with majors. NASCAR is planning to race again by mid-May, and the NFL and college football still have September targeted as the start of their seasons.

All of those sports will, of course, look radically different whenever they resume. Fans might be absent from the stands, whether by their own choice or by government decree. Just the fact that leagues are planning to resume, however, is a big deal. It means we’ve turned a corner — if not in the actual fight against COVID-19, then mentally. It shows we’re willing to accept some of life’s unavoidable risks and push forward. If we accept the idea that we will live in fear forever, we’ll soon have nothing to live for. The return of sports is part of that process.

A few weeks ago, covering something as mundane as junior high volleyball tryouts would have elicited a painful groan from a certain sports editor. Now, I have it circled on my calendar as a day of celebration. June 1. I can’t wait for it, and the return to normalcy it represents.