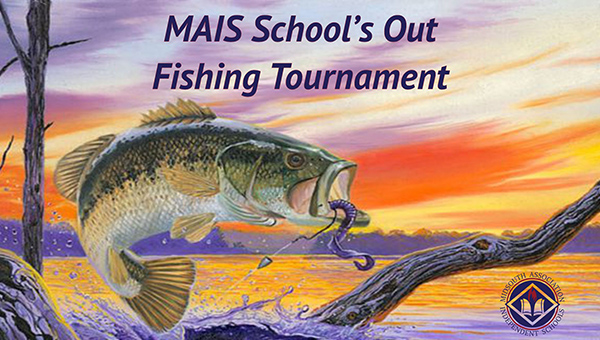 The Mid-South Association of Independent Schools will conduct a statewide fishing tournament for its students May 9-31. (Courtesy of the MAIS)

With traditional sports seasons canceled because of the COVID-19 pandemic, the Mid-South Association of Independent Schools is continuing to find alternatives to offer its students.

Following on the heels of a popular E-Sports Fortnite tournament, the MAIS is stepping outdoors for its next offering — a fishing tournament.

The “School’s Out Fishing Tournament” will run from May 9-31 and is open to all students that attended MAIS member schools in the 2019-20 academic year. There is a $10 entry fee, and there will be prizes awarded for the biggest and most bass, bream and freshwater catfish caught during the month.

Like the E-Sports tournament, MAIS associate director of activities Chris Chance said the fishing tournament was something the association had planned for the 2020-21 school year. It was instead bumped up to fill the void caused when schools were closed and sports seasons canceled because of the pandemic.

“It started as a joke in one of our staff meetings, because the University of Auburn was putting on a tournament and we’d put out some information about signing up for that. Then we contacted the Fishing Chaos people and went from there,” Chance said. “It’s really a neat idea.”

Unlike some fishing tournaments that are on a specific lake or day, the MAIS tournament will run statewide throughout the month and will track results online. Student-anglers must download the free “Fishing Chaos” app in the Apple app store or Google play store and create an account.

After catching their fish, anglers must submit a photo that includes a trough type fish ruler, bump board or measuring tape using the app. Catch and release is encouraged, and fishermen must follow all local and state fish and game laws, as well as those regarding lake access during the COVID-19 shutdown.

More specific rules and instructions are available at msais.org, under the “Bulletin Board” tab.

Prizes will be awarded for the most total fish logged; the total length of all fish submitted; and the lunker fish for each species. The prizes will be gift cards to an unspecified outdoors store, Chance said.

“When Gov. (Tate) Reeves closed down fishing in Mississippi, there was a lot of backlash. That’s where a lot of our people were spending time,” Chance said. “It’s something they can do while maintaining social distancing. So get out and enjoy some sunshine, and catch some fish.”

The fishing tournament is the latest in several non-traditional sports offerings from the MAIS after the COVID-19 pandemic led to the suspension of the baseball, golf, track and tennis seasons in mid-March.

In April, the MAIS offered “Fortnite” tournaments for both high school and middle school students. More than 350 students participated in the two tournaments, and hundreds more watched online.

Their success has led to plans for an even bigger E-Sports event later in May. Chance said the MAIS will host a “Call of Duty” tournament that will feed into a larger tournament involving schools from Alabama, Georgia and South Carolina. The top prize in that tournament is expected to be scholarships worth as much as $1,000.

Details on the “Call of Duty” tournament will be released later this month, Chance said.

Chance added that the alternative sports have not only allowed MAIS students a competitive outlet, but brought in some who don’t compete in more traditional sports.

“These kids are like all of us. They’re looking for ways to connect. It’s one way to connect with their peers,” Chance said. “It’s an opportunity for kids to compete that are missing baseball or track or tennis, and some who have not been able to represent their schools. It’s brought in a different crowd.”

MIAMI (AP) — Don Shula, who won the most games of any NFL coach and led the Miami Dolphins to... read more