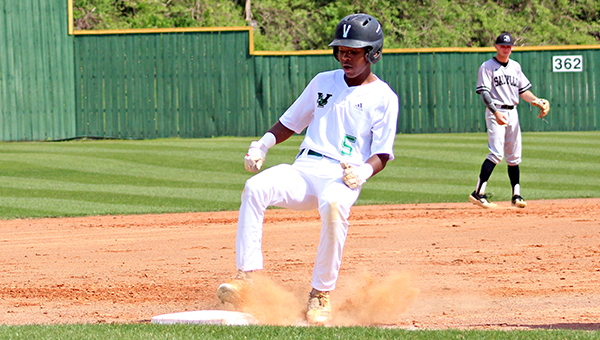 Last summer, Kameron Jones and a few other Vicksburg High baseball players took a road trip to Texas for a showcase tournament. What seemed like a fun weekend turned out to be a pathway to the future.

Jones was spotted at the tournament by coaches from nearby Mountain View Community College in Dallas. They liked what they saw from the outfielder, started recruiting him, and this week signed him to a scholarship offer.

“I really was shocked when I got the call. I really can’t put all the emotions into one (sentence),” Jones said. “It’s exciting. You’ve got to put your best on the line, and every day is going to be a challenge.”

Thankfully, that Texas trip last summer paid off. A few Mississippi junior colleges had shown interest in Jones, but Mountain View was the only one to offer a scholarship. So he’s headed west again to continue his baseball career.

“I really wish I’d gotten to play the rest of my season just to see how many offers I could get and more opportunities. But I’m just happy with the opportunity I got to get,” Jones said.

Jones credited hard work and some inspiration from VHS head coach Antonio Calvin for spurring him on toward greater heights.

STARKVILLE — Mississippi State’s men’s basketball team has added one of the top in-state recruits to its 2020 signing class.... read more