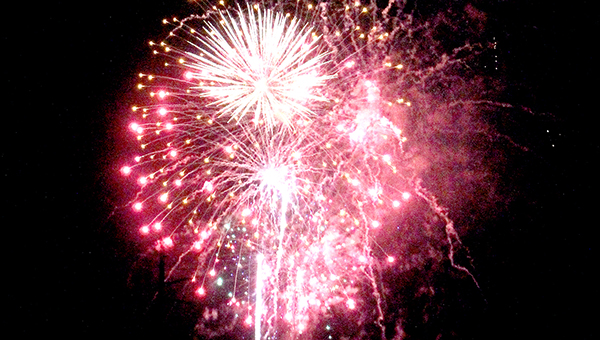 The city of Vicksburg approved a contract Friday for the annual Fourth of July fireworks over downtown Vicksburg. (File Photo)

There will be fireworks on July 4 depending on the city’s situation with the COVID-19 pandemic.

The Board of Mayor and Aldermen Friday approved a $45,000 contract with Pyroman of Campti, La., to put on the annual downtown Vicksburg show. The contract has two extra clauses allowing the city to postpone the event or cancel the show without penalty if it is unable to pay for the event.

The fireworks contract was supposed to be on the board’s May 4 agenda but was pulled by South Ward Alderman Alex Monsour out of concern for the city’s finances. Mousour is over the city’s recreation department, which is responsible for the show. He said Friday he plans to have the show on July 4.

He sees the show as a way to revitalize the downtown businesses and help get the city’s economy going by getting residents to see the annual show.

“The way I am right now, July 4 is two months away; it’s supposed to be the hottest time of the year. The CDC (Centers for Disease Control) says the virus hates heat and it’s the safest thing I think we can do,” Monsour said.

“Everybody’s spread out in different locations. You can spread out as far as you want to, to watch the fireworks. I think it’s the safe thing to do.”

Monsour said the city cannot shut down and live in a bubble until the virus is eliminated, “Otherwise we won’t have to worry about budget cuts anymore, we’ll have to cut everything.

“I’m for getting the revenue back in the city, and I’m for shops downtown. We’ve got to find a way to traffic down there to it, and this is one of the best ways to do it.”

He said the show will be handled in a safe manner.

“Vicksburg is a unique city and we’ve got to figure out a way to get this thing up and running, and as fast as we can,” he said. “I want people to be all downtown, spread out regular distance apart, and be able to go out and enjoy something since this pandemic.

“We need to do it safely and make sure they (the residents) understand that we agreed to do the fireworks and obligate the money, but we don’t have to do it then, we can do it at a later date if we have to if there’s something that won’t allow us to do it at that time.”

Mayor George Flaggs Jr. said Friday he will present a reorganization plan for the city at the May 18 meeting... read more