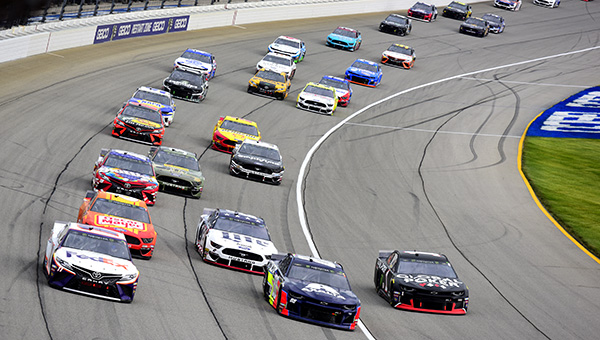 NASCAR Cup Series drivers make their way around Chicagoland Speedway during the Camping World 400 in June 2019. This year’s race at Chicagoland has been canceled and its date reassigned to another track because of the COVID-19 pandemic. (NASCAR Media/Getty Images)

CHARLOTTE (AP) — NASCAR has canceled races at Richmond, Chicagoland Speedway and Sonoma Raceway in California, as it revises its schedule to restart the season.

A Gander RV & Outdoors Truck Series race that was to be run at Richmond on April 18 remains postponed, with officials saying details would come later for rescheduling. The .75-mile Virginia track’s Sept. 11-12 race weekend remains on the schedule. Its September Cup Series race is part of the sport’s playoffs.

Chicagoland was also set to host the Truck Series (June 19) and ARCA Menard’s Series (June 18). NASCAR officials indicated those races will be reassigned at a later date.

“The difficult decision to realign our race events was a combination of where we fell on the schedule, proximity to NASCAR’s teams and the safety and well-being of our community and larger NASCAR industry,” Chicagoland Speedway president Scott Paddock said.

Officials for the road course said in a release they had worked with NASCAR to find an alternate date on the schedule, but a suitable replacement could not be reached, “given the ongoing uncertainty around large events in California.”

Each of the three tracks released statements, saying ticketholders for the canceled races would receive a full refund or a 120 percent credit toward a future event.

NASCAR is attempting to race at tracks within driving distance of its North Carolina-based teams as it resumes competition following the sports shutdown due to the coronavirus pandemic. It has only announced races through May. It will hold seven races in 10 days — including four in the top-level Cup Series — at Darlington and Charlotte beginning on May 17.

NASCAR officials said in a release that future adjustments to this season’s schedule “will be released in the near future.”

“Due to the current pandemic, NASCAR has faced several difficult decisions, including realigning race dates from several race tracks,” a NASCAR statement read. “These decisions were made following thorough collaboration with local and state government officials from across the country, including the areas of the affected race tracks. We thank all our fans for their support, and we look forward to our return to racing.”