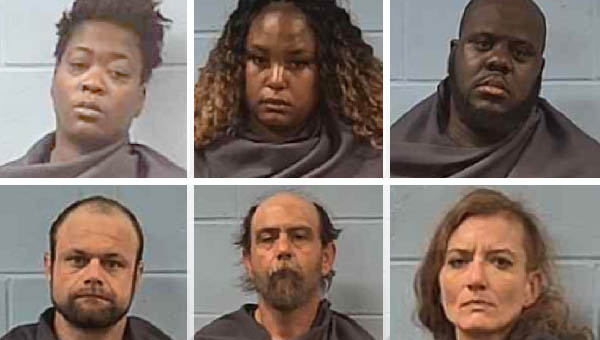 Thursday, officers with the Vicksburg Police Department made several narcotics-related arrests, including one connected to a traffic stop during the city’s civil emergency curfew.

Shortly after 8 p.m. Thursday, officers responded to New Main Apartments, 2727 Alcorn Drive, for a report of drug activity centered around a vehicle. Marijuana and powder cocaine were recovered from the vehicle, and two women were arrested at the scene.

Beard appeared in Vicksburg Municipal Court before Judge Angela Carpenter on Friday, where her bond was set at $25,000 and she was bound over to the Warren County grand jury.

Also arrested was Olivia Wells, 32, of 2727 Alcorn Drive, Apt. 108. She also appeared in court Friday on a charge of possession of cocaine. Wells’ bond was set at $15,000 and she was bound over to the grand jury.

Horatio Carson, 33, 272 Cedars School Circle, Vicksburg, attempted to flee from the Narcotics/NET Team during a traffic stop at 9:49 p.m. Thursday.

After wrecking his vehicle, Carson was taken into custody. He was charged with one count of felony eluding, one count of possession of cocaine and one misdemeanor warrant.

Carson appeared in court Friday where Judge Carpenter set his bond at $70,000 and he was bound over to the grand jury.

At 11:42 p.m., officers made a traffic stop for curfew violation in the 1300 block of Clay Street. A consensual search of the vehicle revealed a felony amount of methamphetamine. All three occupants were charged with Possession of Methamphetamine.

In a new executive order announced Friday, Gov. Tate Reeves will extend his Safer At Home Order for another two... read more