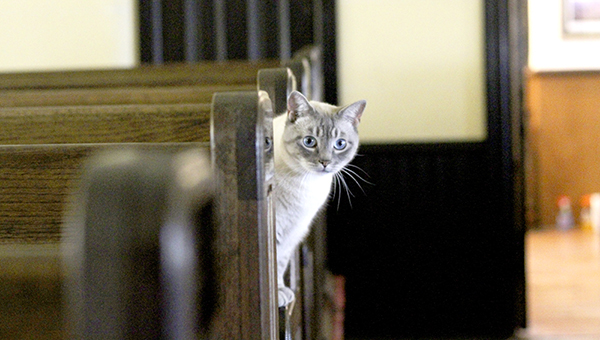 Ash, where did you go?

The following is an “exclusive” interview with Ash, the Old Court House Museum cat, talking about his days-long disappearance back in February.

Ash, before leaving, told Cecilia to let the humans who work at the museum, Bubba Bolm and Jordan Rushing, know of his plans.

But since the cats had had a bit of a run in a while back over a mouse they were both chasing, Cecilia must have decided to be a little “catty” and kept the information to herself.

Hence when the sun began to set, and there was no sign of Ash, the museum staff began to worry.

An all-points bulletin was posted on Facebook. It included a picture of Ash, and in looking at the photograph, there was no denying how he got his name.

The color of his fur was every bit the color of cigar ashes, and since Bubba enjoyed a stogie every now and again, it was fitting.

With each passing day Ash was gone, the more the staff — and now the community — became concerned. They wondered what could have become of him.

Had he left the grounds and become discombobulated? Had he been lured away by a she-cat? Or had he been scooped up by an adoring admirer?

Bubba had said Ash was quite popular at the Old Courthouse Museum.

When tourists visit, Ash greets them. Children and adults alike at times even wanted to pick him up and hold him.

Those who had kept vigil during his time away have long wondered where he went and what he did.

So, to satisfy their curiosity, Ash sat down for an interview.

To gain a little perspective of Ash’s adventures, he said, one must know how it all began.

When Ash was just a kitten he hitched himself to the underbelly of a truck. He said the ride was harrowing at times, but he hoped the outcome would be better than the life he left behind.

Ash, along with his four brothers and sisters, had been born near a trash heap in downtown Vicksburg. Those first few weeks, all seemed good, he said.

“We snuggled up to mama and when we were hungry she had plenty of milk for us babies,” Ash said in his exclusive interview with Vicksburg Living, his first since his “disappearance.”

But, that didn’t last forever.

When it came time for the kittens to be weaned, Ash said, it was every cat for him or herself.

Because his brothers were bigger and meaner, they took off toward the river, leaving their little brother behind.

His sisters decided if they played their cards right and found a house where children lived, they would have a safe place to stay.

Alone and feeling scared — a scaredy cat if you were — Ash said he began to yowl.

“But when no one seemed to care that’s when I climbed under the truck,” he said. When the vehicle started to move, Ash hung on for dear life.

He said he had no idea where he would wind up, but between the unknown and the harrowing ride, he was frazzled by the time the truck finally stopped.

“I couldn’t even bring myself to come out from underneath the vehicle,” Ash said.

That was until a nice lady came and assured him everything was going to be OK. Right away, Ash said, he detected something special about the woman.

“It was like she possessed an intuitive awareness or sixth sense, you might say, and I wondered if it was only with cats,” Ash said.

As she placed some food near the truck, Ash’s growling stomach made it nearly impossible to turn down, so he inched his way toward the bowl to eat.

Ash said he found out later the woman’s name was Becki Bolm, a National Wildlife Rehabilitator and wife of the Old Court House Museum’s director and curator Bubba Bolm.

It had become a tradition for the museum to have a cat or two reside at the museum, but at the time there were none.

Ash’s ride on the truck and arrival at the museum was one of those “right place at the right time” events. The once homeless kitten now had a very big and historic “home” to call home and roam.

For almost two years, the Old Courthouse Museum has been Ash’s home and never once has he thought about leaving.

He loved the museum’s staff and enjoyed his daily jaunts around the historic grounds.

“I like to try and catch lizards and chase butterflies,” he said.

Ash was living the good life, which had made him wonder what had become of his siblings.

This wonder to what became of his brothers and sisters is what prompted him to leave the museum for a few days.

Remembering his brothers had talked about heading toward the Mississippi River, Ash said, it had not been hard to locate them.

“They were roaming around near the docks,” Ash said.

Still feral, they got a little hissy with Ash, thinking he was about to edge in on their territory. That was until they realized this was their little brother.

“They were dumbfounded when they saw me all plumped out. I guess rodents and dead fish are no match for high-grade cat food,” he said.

While it appeared both brothers had gone through some rough patches — one was missing an eye and the other looked a bit mangy — they were still alive, and for alley cats, they seemed to be doing as well as could be expected.

As Ash left the waterfront, he realized finding his sisters was going to be a bit harder.

Unlike the brothers, he had no idea which direction they had headed. But thanks to a tip from a Tabby, Ash was able to locate both of his sisters.

They were in the backyard of a home on Cherry Street, where one of the sisters was sunning herself and the other was perched on a picnic table licking her paws.

It appeared both had scored a winning hand just as they had hoped. A swing set was in the yard signifying young children lived there.

Upon seeing Ash, the cats began meowing in excitement. They had immediately recognized their brother.

Who could forget his piercing blue eyes?

After a couple of days playing catch up and listening to his sisters describe what it was like living with a dog and him telling them all about the nooks and crannies at the Old Court House Museum, Ash decided five days on the prowl had been long enough.

Upon his arrival back home, Ash said it shocked him to see how elated everyone was acting.

That was until he found out Cecilia had not “let the cat out of the bag” about his plans.

“I had never intended to worry anyone,” he said simply. With that, he stood up, stretched and then sauntered into the museum’s office, interview over.

Cecelia was there lying on a filing cabinet. She watched as Ash jumped into Bubba’s lap and began snuggling.

A soft purring noise from both cats could then be heard.

No doubt everyone was glad Ash was back at home.