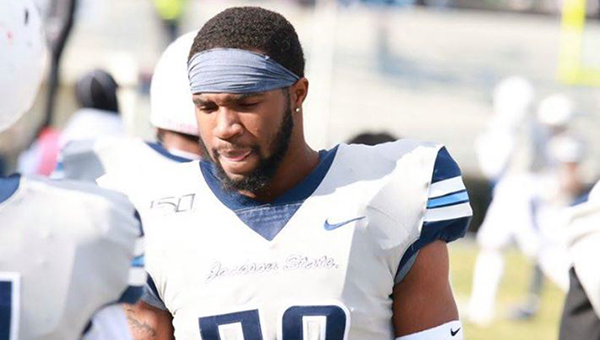 Jackson State linebacker Keonte Lumpkin (58) walks along the sideline during a 2019 game against Alcorn State. Lumpkin, a former Warren Central star, walked on at JSU and played in four games last season. He is hoping to play a much bigger role for the Tigers in 2020. (James Motley/Jackson State University Athletics)

His college football career is only two years old, and already Keonte Lumpkin has endured more than his share of twists and turns.

He’s walked on at two different schools, and was cut by one. He patiently waited for an opportunity to get on the field, and then made the most of it when he did. As he prepares for his sophomore season as a linebacker at Jackson State, the former Warren Central star is using the setbacks, triumphs, and family support to keep pushing forward as he pursues both a college degree and gridiron glory.

“I had faith in God that He would give me the opportunity, and when opportunity arose I just had to take it,” Lumpkin said.

Lumpkin’s 2019 season at Jackson State was not a remarkable one on the stat sheet. He played in four games and totaled six tackles and one forced fumble. What is remarkable is the path he took to earn those stats.

Lumpkin had 85 tackles as Warren Central finished 9-4 and reached the second round of the MHSAA Class 6A playoffs in 2017. His 15 tackles for loss tied for the team lead.

Despite that success, he had only started for Warren Central for one season and received almost no offers to play college football. The only one he could manage was a walk-on opportunity at Mississippi Gulf Coast Community College. It was a far from glamorous role, but it did allow him to keep playing football and continue his education at a point where both dreams might have slipped away.

“It was a last resort type of thing,” Lumpkin said. “I ended up making the team and redshirted. I was like the water boy or whatever, but I said I was going to stay because I wanted to be an athlete and play for the team, and I also wanted to continue my education while trying to be an athlete.”

His athletic career only lasted one season at Gulf Coast. He was cut from the team after redshirting as a freshman. Although it was obviously a disappointing day, it quickly led to another, better opportunity.

“When they cut me from Mississippi Gulf Coast, that same day I had received a phone call from (Jackson State linebackers coach Dwayne Curry) telling me to come try out at Jackson State at their fall camp,” Lumpkin said. “I went there, did some spectacular things, had a couple of tackles here and there, and the coach told me, ‘You’re on the team, but I don’t have any scholarship money.’ I used the opportunity to earn a scholarship not just to be an athlete, but to pay for my schooling.”

Lumpkin did not get on the field right away, but managed to get some playing time. He had three tackles in a 41-6 loss to Alcorn State in the season finale, which was a nice way to end the year and bounce into 2020.

“I plan on being a starter this year. I’m just working hard and trying to rise up the depth chart,” Lumpkin said. “I think the sky is the limit. The only thing that can stop me now is myself. But not only being an athlete is important, my education is important.”

Indeed, Lumpkin is not losing ignoring the “student” part of “student-athlete.” He’s majoring in civil engineering at JSU, and made the Vice President’s list his one year at Gulf Coast with a grade point average between 3.30 and 3.99. He has a 3.5 GPA at Jackson State.

That is where his family comes in. Lumpkin comes from a family of athletes — his aunt, Cynthia Hall, was a star basketball player at Mississippi State and plenty of other relatives have played sports — and he said they’ve supported him in both his academic and athletic pursuits. His father, Bobby Lumpkin, has attended every game Keonte has played and the two often talk football and life, the son said.

“My family has been there with me every step of the way. All of my family members have been athletes. It was challenging with a family that is known as athletes. I lived up to the role, but I lived up to a bigger role because I was also big in my education,” Lumpkin said. “They really respected me because I was choosing my education more than just choosing football. They also followed me in my dreams every step of the way.”

One family member in particular has inspired him. His grandmother, Mattie Hall, had a stroke a couple of years ago. Lumpkin said his goal is to succeed so she can be proud of him, and watch him play.

This would normally be the time of year when high school athletes and teams stake out their legacies. It is,... read more