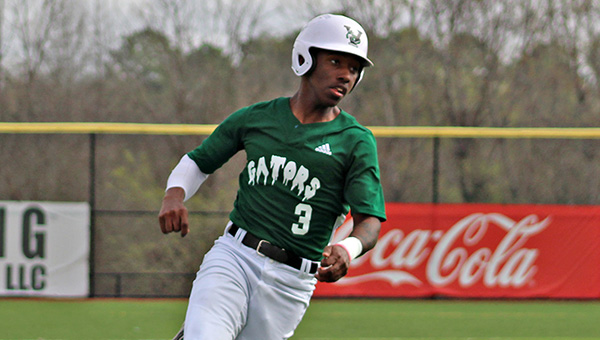 Vicksburg High’s Kendrick Bershell runs toward third base. The senior was one of Warren County’s top baseball players this season, with a .471 batting average. (Ernest Bowker/The Vicksburg Post)

This would normally be the time of year when high school athletes and teams stake out their legacies. It is, or would have been, championship week in Mississippi for track, golf and tennis. The softball and baseball playoffs would have been heading into the second round, the point where victories separate the great teams and seasons from the merely good.

The next couple of weeks would have brought us spring football and a neat finish to the 2020 sports calendar, and a few weeks after that The Vicksburg Post would have assembled its all-county teams as we set sail into the summer sun.

Of course, most of those things will not happen. The spring of 2020 has been an utter disaster on many fronts, least among them the cancellation of sports across the board.

It hardly seems fair, which is why we at The Vicksburg Post will make sure at least one of those spring traditions carries on. We will still do our annual all-county teams for softball and baseball, even though seasons in both sports were stopped at the halfway point. Both are in the process of being assembled and will be published later this month.

Picking a baseball all-county team is a hard chore. Baseball is a game where performance is judged on the big picture, and all four of our local teams played somewhere between six and 12 games rather than the normal 20-25. Some players who started slow will, unfortunately, not make the team even though their talent likely would have pulled them out of the slump if given more time.

Softball was a bit easier. Porter’s Chapel Academy and St. Aloysius both played full seasons back at the start of the 2019-20 school year and had players who are very worthy all-county selections. Warren Central and Vicksburg didn’t get a full fast-pitch season in, but did play a slow-pitch one in the fall that we can lean on to supplement their fast-pitch performances. It’s not ideal, not even necessarily the same sport, but nothing this spring is really normal.

We also have a plan to honor our senior spring athletes that is coming together. We’ve sent out questionnaires to athletic directors at the high schools for their coaches and athletes to fill out.

The idea — borrowed from our sister paper in Brookhaven — is to run them online and in print with a virtual senior night. We’ll run them as we get them back, hopefully beginning this coming week, so if you haven’t gotten or filled them out yet, please contact your coaches or athletic directors, or e-mail us at sports@vicksburgpost.com.

This has been a weird season for everyone in the sports world. Nothing we can do at this point will get back the lost games and memories, but we can certainly try to preserve them and make a couple of new ones.

Brothers Eli and Bryce Chapman were out fishing in Warren County, like they do almost every day, when they were... read more