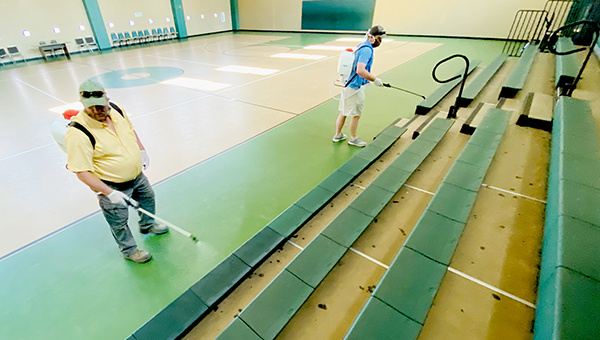 Rick Daughtry and Jay Harper, with the city of Vicksburg, spray down the bleachers at the Jackson Street Community Center last week. The center is not open, but the city did move ahead and disinfect the bleachers and playground equipment at the facility. (Tim Reeves/The Vicksburg Post)

The maintenance director for Vicksburg’s Parks and Recreation Department said he plans to sanitize and disinfect the city’s public parks equipment, benches and ballfield bleachers on a regular basis.

“I plan to have them sanitized every day, weather permitting,” Rick Daughtry, the department’s maintenance director, said.

The parks, bleachers and tennis courts were closed March 25 out of concern for the COVID-19 virus and were allowed to reopen May 7.

Parks and Recreation employees initially sprayed playground equipment, stands and benches ahead of the parks being allowed to reopen.

Daughtry said the department uses a disinfectant called “Vanquish” that is approved by the Food and Drug Administration and the Environmental Protection Agency. It can kill the COVID-19 virus and is safe for people, he said.

“We spray anything that can be touched,” Daughtry said. “We mix it up and spray it and walk away. It dries in about two minutes.”

Daughtry said an employee goes to each park during the day to clean the area and sanitize the equipment and benches.

“The community service workers clean the restrooms at the parks and at Catfish Row,” he said. “They’ve been given a sprayer and they spray the restrooms after they clean them.”

The Jackson Street Community Center has not yet reopened, but city crews did spray the bleachers and the playground equipment at the facility last week.

Mississippi Department of Transportation officials hope to soon sign a contract for a project to repair a slide area that... read more