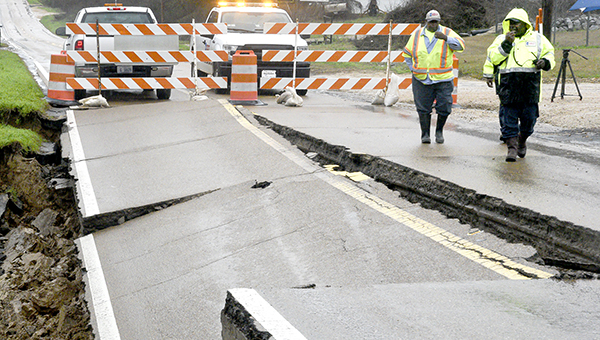 Personnel with the Mississippi Department of Transportation look over damage on a section of U.S. Highway 80 on Feb. 11. (Courtland Wells/The Vicksburg Post)

Mississippi Department of Transportation officials hope to soon sign a contract for a project to repair a slide area that damaged a section of U.S. 80, an MDOT spokesman said.

MDOT spokesman Mike Flood said MDOT officials are presently in the process of acquiring approximately 0.268 acres of land for rights of way to repair the problem, adding officials “hope to go to contract in a few weeks.” He said the highway will not be widened in the project.

Flood said the heavy rain the area has received since the state closed the road to traffic has only had a minor impact on the area.

“It will not affect our current plan for repair,” he said.

On Feb. 11, state officials closed the section of the major thoroughfare between the cement plant and Mount Alban Road after problems with the road caused by runoff from heavy rains eroded the highway’s shoulder and caused the roadway to fail, making it unsafe to travel.

This is not the first problem to hit the highway.

Citywide curfew will expire May 21 as casinos reopen

Following the decision by the Mississippi Gaming Commission to allow Mississippi casinos to reopen at 8 a.m. Thursday, May 21,... read more