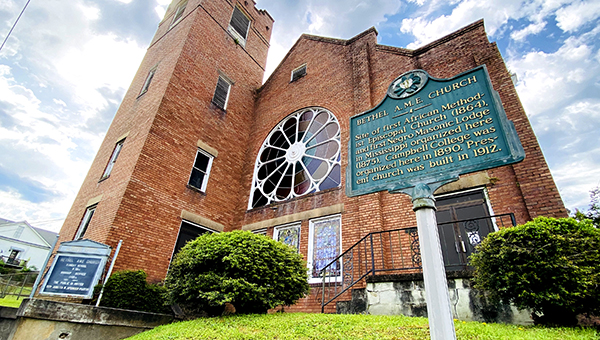 Historic Bethel A.M.E Church is among the Vicksburg churches that will be allowed to reopen Sunday with 50 percent capacity after Mayor George Flaggs Jr. signed an executive order Friday. (Tim Reeves/The Vicksburg Post)

Flaggs said he found a previous order issued by Gov. Tate Reeves that allows him to increase the number of people who can attend services in churches.

He said the order is effective Sunday morning, allowing pastors to have their churches cleaned and prepared for service. As of Friday afternoon, Flaggs said he had not contacted church pastors about the order.

“Churches are essential and they can have 50 percent of their capacity as long as they do sterilization, as long as they use masks, they use their social distancing,” he said. “Families can sit together, that’s fine.”

He said using masks and social distancing at church services will help reduce the spread of the virus.

“I just think it’s so important we open up churches, and it’s for any worship service within your facility with 50 percent capacity,” Flaggs said. “Now that the governor has given me some relief, I want to be able to give the streets back to the public and reopen the city.”

He said city government has been open at full capacity for three weeks with one case of indirect exposure to COVID-19.

“The restaurants have been open at least two weeks, our beauty and barbershops have been open for at least a week, and we did get one other death this week which was unfortunate,” Flaggs said. “But I think we’re still on the plateau and we handled it and we can continue to do it.”

Flaggs said it “broke my heart” to have to include churches in the city’s March 22 emergency declaration.

“I think the churches have been very accommodating; they’ve been good to us … We didn’t have one case where a minister didn’t stand behind what we were doing,” Flaggs said. “Surely if we can open casinos, then we can open churches.”

Whether it is the fear of pain or the thought of getting unwelcome news, having a medical test performed can... read more