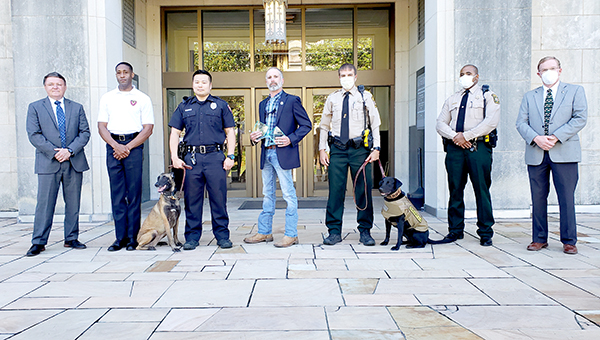 Vicksburg Police Officer Matthew Barnes and Warren County Sheriff’s Deputy Dustin Keyes are among the best of the best.

The K-9 officers were named among the recipients of Central Mississippi Crime Stoppers’ “Top Cop” award for 2020. The awards are presented annually by Central Mississippi Crime Stoppers to officers in departments in the organization’s district, which extends from Grenada in the north to Crystal Springs in the south and from Meridian west to Vicksburg.

“Each department head (of the agencies in the district) appoint one of their deputies or police officers to receive the ‘Top Cop’ award, it’s given out to one individual (in each department) who is deserving of that award,” said District Attorney’s investigator Chris Satcher, a member of the Crime Stoppers Board of Directors.

Besides the award, each officer received a $100 check and $25 gift card for their department. They also received personal protection items.

Both officers characterized receiving the award as “great.”

A native of Vicksburg, Barnes has been a police officer for four years. He is a graduate of Warren Central High School and served in the U.S. Army. His K-9 partner is a Belgian Malinois named Nadia that is trained on tracking and narcotics detection.

“Matthew is a great, hard worker; he had made numerous drug arrests before he got his K-9,” Vicksburg Police Chief Milton Moore said.

Moore said Barnes was nominated for the award because of his work ethic, the number of arrests he has made, and “He’s very dependable; we’re glad to have him.”

Keyes is also a native of Vicksburg and graduated from St. Aloysius and has been with the sheriff’s office for six years. His K-9 partner Heidi is a Labrador retriever trained in tracking and narcotics. She is trained to detect marijuana, cocaine, methamphetamine and heroin.

“Several months ago, Deputy Keyes was working the night shift when he was made aware of a vehicle that was wanted for an armed robbery in the Brandon community,” Pace said. “He spotted the vehicle and attempted to stop it on Highway 61 North. The occupants got out and ran, at which time one of them shot at Deputy Keyes.”

The couple then carjacked a vehicle with two people inside, he said, leading to a chase throughout the county and in Vicksburg and involving multiple departments. The couple was later captured in the Kings community. The hostages, who managed to escape during the chase, were found on Drummond Street.

“It was after they were taken into custody that they were found to also be responsible for a murder in another state as well as other felony crimes,” Pace said, adding because of the multiple state crime spree, the county was able to partner with the FBI.

The couple, he said, were later convicted of federal crimes and sentenced “to significant time in the federal penitentiary. They currently have state charges for felonies pending in other jurisdictions.”

Pace said Keyes’ professionalism, dedication to duty and observation skills that night, “Led to two very dangerous individuals being taken off the street and they will in all likelihood spend the rest of their lives in the penitentiary.”

Summer McGee was formally charged with first-degree murder in Vicksburg Municipal Court Monday in connection to the Friday murder of... read more