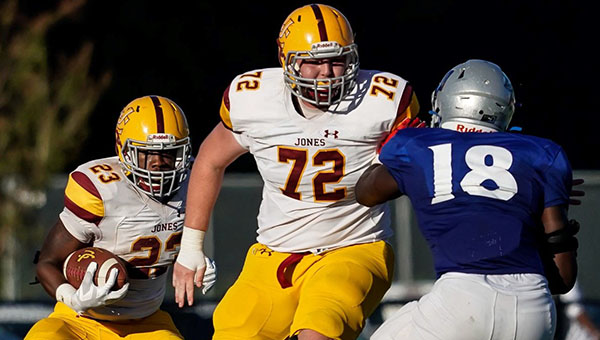 A little over a year ago, Reed Buys passed up a host of scholarship offers for a year of junior college football and a handshake agreement for a better deal down the road from Mississippi State.

It didn’t work out.

Buys got hurt. Interest cooled. The coach who had made the agreement got fired. The offer disappeared.

Dejected, Buys again mulled over a bunch of offers this winter and spring. He was ready to take one until the old opportunity rematerialized out of thin air. He got a much firmer promise this time, and jumped on it.

The former Warren Central offensive lineman announced Monday that he has accepted a scholarship offer from Mississippi State. He has not yet signed — that will come later this week, he said — but will be eligible to play immediately in the 2020 season.

“I’m pumped. It’s something I’ve wanted to do my whole life,” said Buys, whose brother Talbot was an offensive lineman at Ole Miss. “I got to watch Talbot play and it motivated me to play at that level. Dreams come true, and I just can’t wait to get in and start grinding and earn a spot on the line.”

Reed Buys spent the 2019 season at Jones College. He signed there in February 2019 after reaching a handshake agreement with the former Mississippi State coaching staff under Joe Moorhead that he would be signed during the junior college signing period in December 2019.

Buys missed three games with an ankle sprain, however, and the interest from the Bulldogs cooled. Moorhead was fired after Mississippi State’s bowl game in January, and Buys’ dreams of playing football in the Southeastern Conference seemed to head out the door with him.

“I shook hands with Coach Moorhead and there was an agreement that they were going to sign me after my first season and I was going to be there in January. That fell through,” Buys said. “I had gotten hurt — I had a bad ankle sprain and missed three games — and I don’t know if that set me back with them or they decided to just not bring me in. They wanted me to play another season at Jones and then the whole coaching change went down.”

He still had plenty of offers and interest, including from several Power 5 programs. He was almost ready to sign with UAB when Mississippi State assistants Brad Peterson and Rod Gibson — holdovers from Moorhead’s staff to his successor Mike Leach — convinced him to hang in there.

“I wanted to go ahead and get in a program. I love juco ball, but I was ready to get into a D-I program,” Buys said. “Then Coach Gibson called me and told me there was a possibility I could get an offer in December. He wasn’t promising anything, just trying to talk to me about the situation.”

As it turned out, Buys only had to wait until May for an offer.

Stewart Reese — a two-year starter at right tackle — announced he was leaving Mississippi State to play at Florida. Suddenly in need of a right tackle, the Bulldogs’ coaching staff scrambled for a replacement and quickly settled on Buys.

Mississippi State offered Buys a scholarship late Monday afternoon, and he accepted immediately. Within 72 hours the ghost of an opportunity he had been chasing for 18 months was his for the taking.

“Mississippi State coming out of nowhere, it’s a blessing. I’m super thankful for that,” he said. “It’s crazy how it worked out. It worked out perfectly. It’s unbelievable how fast it worked out.”

Buys has primarily played right tackle at both Warren Central and Jones, but also rotated to left tackle and center last season. He said he feels confident he can play all five positions on the line.

He’s also fired up to play for Leach, the quirky coach who figures to install a pass-heavy offense with the Bulldogs.

“I remember a long time ago, me and my brother Booth would always watch videos on Mike Leach and the way he coaches,” Buys said. “I remember saying a couple years back that I would love to play for that guy one day. It’s happening right now. I can’t wait to play for him and that whole coaching staff. I think it’s the perfect fit for me.”

So is Mississippi State. Buys said he’s wanted to play football in the SEC his whole life, and now he’ll finally get the chance.

“It’s something I’ve always wanted. I’m super motivated because I’ve got that chip on my shoulder. I’ve had a lot of people pass on me since high school. I’m not going to take this for granted,” Buys said. “I’m going to go out there and be the best player I can be and try to earn a starting spot. Hopefully State isn’t the last spot for me. Hopefully this is a stop before the NFL.”

OXFORD — Ole Miss and Southern California have agreed to a home-and-home football series for the 2025 and 2026 seasons,... read more