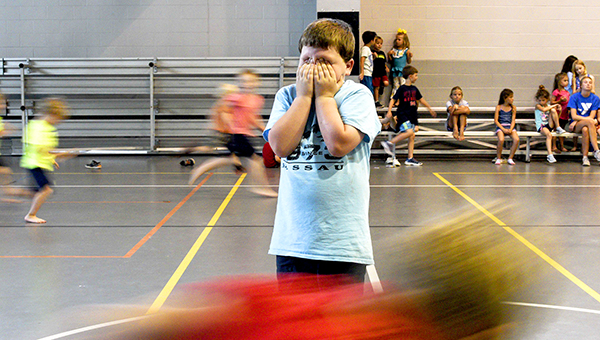 In this photograph from June 2018, Levi Segree covers his eyes while campers sprint to their respective corners while playing Four Corners during summer camp at the YMCA. (Courtland Wells/The Vicksburg Post)

For years, parents have stood in early morning lines hoping to get their child registered for the YMCA’s Summer Day Camp.

But for safety measures, due to the COVID-19 pandemic, registration as well as the start date for the camp is being altered.

That waiting means for all those who are interested in participating in the summer day camp program, parents need to make sure the YMCA has an updated email address.

“We think the quickest and easiest way to get the word out about registration is through email,” Doiron said, so for those who have yet to submit this information to the YMCA. “In the past, online registration was not permitted, but we worked with the state and they are going to allow us to do it now probably because of social distancing. So there is not going to be a mad dash and waiting in a long line with a bunch of other people. They will be able to go online and register.”

Also, because of social distancing guidelines, the number of children who can participate will be less than in years past.

“We don’t know what that number is, but we are anticipating we will have somewhat smaller numbers,” Doiron said.

The new expansion that has been underway at the Purks YMCA is nearing completion and this, he said, could offset some of the day camp’s reduction.

“We are putting the finishing touches on this big old expansion and one of the main drivers for the development was the ability to expand day camp, so we have much greater capacity now.”

Doiron said the expansion is projected to be completed in the first week of June.

“Warner Tully is celebrating its 60th summer and we are having camp this year,” Doiron said. “Now, what that looks like – how many children can be involved or what kind of safety protocols we will need to follow – we don’t know yet, but we are communicating with our campers, people who have already registered and people that have registered in the past.”

Doiron again stressed the importance for parents to make sure the YMCA has an email address on file so those wanting their children to attend Warner Tully can get vital information.

“Email is their best friend,” Doiron said. “And as soon as we get their (state and local government) guidance, we will let them (the campers) know.”