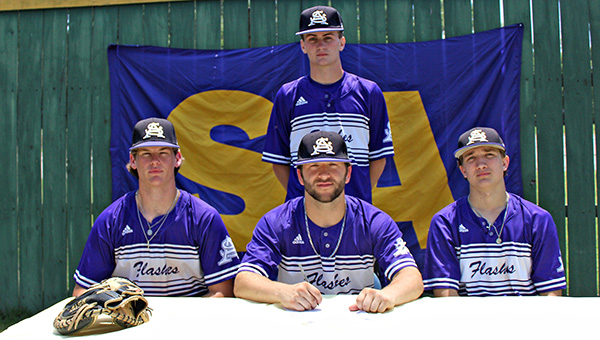 This is part of a series of stories recognizing Warren County’s senior athletes who had their 2020 spring seasons cut short because of the COVID-19 pandemic. The Vicksburg Post will attempt to recognize all of Warren County’s spring teams and athletes over the next couple of weeks.
Up next: St. Aloysius baseball.

St. Aloysius seniors
Baseball
Lane Hubbard
Lane played baseball for St. Aloysius, and said his best sports memory was pitching the last inning of a perfect game against Porter’s Chapel Academy this season. He will attend Delta State University. Lane is the son of Lisa Hubbard and the late Tim Hubbard.

Thomas Phillips
Thomas played baseball and football for St. Al. His best memory is hitting a game-tying triple in the sixth inning against Riverfield Academy last season. Thomas is the son of Zena and Chad Phillips.

Kieran Theriot
Kieran was a multiple-sport athlete for St. Al who starred in football, soccer and baseball. He was the 2020 Vicksburg Post boys’ soccer Player of the Year. His favorite baseball memory was getting a walk-off hit against Central Hinds. Kieran is the son of Craig and Alicia Theriot. He has accepted a scholarship offer to play baseball at Mississippi Delta Community College.

Haden Luke
Haden was a multiple-sport athlete who played football, soccer and baseball for St. Al. He was the starting goal keeper for two soccer state championship teams, and has signed to play baseball at Mississippi Delta Community College. His favorite sports moment is becoming a member of the Flashes’ family. Haden is the son of Suzanne and Kenneth Luke.

Ethan Parmegiani
Ethan was a three-year starter as the catcher for St. Al’s baseball team. He said his best sports memory was hitting a game-tying double against Central Hinds in a key district game last season. Ethan is the son of Kara and Jay Parmegiani. He has signed to play baseball at Holmes Community College.