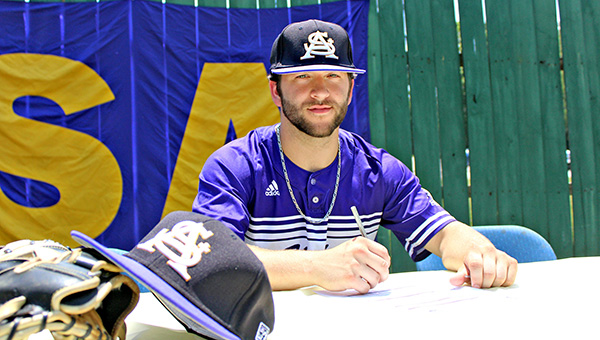 For two full seasons and part of a third, Ethan Parmegiani’s job was to protect home plate at Bazinsky Field as St. Aloysius’ starting catcher.

On Thursday, his final act with the team — and perhaps his greatest achievement — occurred about 330 feet away with his back to the right field wall.

In a sun-drenched ceremony in the Bazinsky Park outfield, Parmegiani gathered with family, coaches and teammates to sign a national letter of intent to play at Holmes Community College next season. He is the third member of St. Al’s senior class to earn a baseball scholarship, after Haden Luke and Kieran Theriot signed with Mississippi Delta earlier this year.

“They were the first school to call me, and the first to actually want me. I took it right then and there,” Parmegiani said. “I’ve wanted to play college ball since I was a little kid. I’ve always wanted to play and keep going as far as I can.”

Parmegiani took over as St. Al’s catcher in the 2018 season and never gave up the job. In 49 games over the past three seasons, he had a .329 career batting average, with 14 doubles and 45 RBIs.

This season was shaping up as his best before the COVID-19 pandemic shortened it to only nine games. Parmegiani had a team-high .417 batting average, with two doubles, two triples and 12 RBIs.

“He’s a really hard worker, and he’s continued to work at his craft. He’s had some really good coaching outside of St. Al in the summer and he’s worked really hard there, too, and continued to grind it out,” St. Al coach Sid Naron said. “He had a tough last summer. He got hurt, or else I really believe he would’ve already been signed last summer. He stayed the course, and he’s been working hard even through all of this COVID thing. It’s a true testament to what kind of player he is.”

Parmegiani said that was just the way he knew how to play the game.

“I put everything into it. A hundred percent every day, every practice, every game, and it paid off for me,” he said.

This is part of a series of stories recognizing Warren County’s senior athletes who had their 2020 spring seasons cut... read more