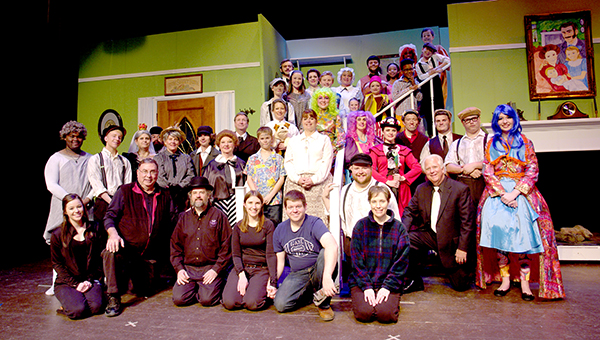 The cast of the Vicksburg Theatre Guild's performance of Mary Poppins poses for a cast photo in 2017.

Vicksburg Theatre Guild set to return with ‘The Sound of Music’

As sheltering in place restrictions are lifted and businesses begin to open back up, the Vicksburg Theatre Guild is also ready to get the show on the road. “We are crawling back from under a rock,” VTG secretary Mike Calnan said.

The group’s first main stage production following the onset of the COVID-19 pandemic will be “The Sound of Music.”

Auditions for the musical will be held Wednesday and Thursday from 6-to-8 p.m. and again Friday from 10 a.m. to noon. Auditions will be held at the Parkside Playhouse Theatre, 101 Iowa Ave.

Casting will include parts for males ages eight to 80, females ages four to 70, and a chorus of nuns ages 16 and older.

Those auditioning, Calnan said, will need to be prepared to perform a song from “The Sound of Music.”

“There will also be a small number of non-singing parts,” he said.

“We will make modifications in accordance with additional municipal guidance,” he said.

The musical will be directed by Dr. Paul Ballard and rehearsals will be held Mondays, Tuesdays and Thursdays.

In addition to Ballard, Dorothy Brasfield, who is the organist at the Church of the Holy Trinity, Episcopal, a board member of the Mississippi Symphony Orchestra and director of the Conservatory of Fine Arts in Vicksburg will be in charge of the live orchestra for the musical. Sharon Penley, director for the First Presbyterian Church in Vicksburg and the Vicksburg Chamber choir, will be lending her expertise with the nun chorus.

Chesley Lambiotte, the performing arts teacher at the Vicksburg Catholic School, will help with choreography and Katie Hoitt, the choir director at the Academy of Innovation and the Mississippi Boychoir, will assist with the children in the production.

Ballard said he is excited to have these professionals assisting with the production.

“The Sound of Music” was written by Richard Rogers and Oscar Hammerstein ll and is based on the real-life story of the Von Trapp family singers.

The original Broadway production opened in 1959 and won five Tony Awards including Best Musical. In 1965, it was adapted into a film musical starring Julie Andrews and Christopher Plummer and won five Academy Awards.

Some of the most beloved and iconic songs from the musical include “Edelweiss, “My Favorite Things,” “Climb Ev’ry Mountain,” “Do-Re-Mi” and the title song “The Sound of Music.”

Not only did Warren County report more COVID-19 cases Friday than it had in nearly two weeks, it also reported... read more