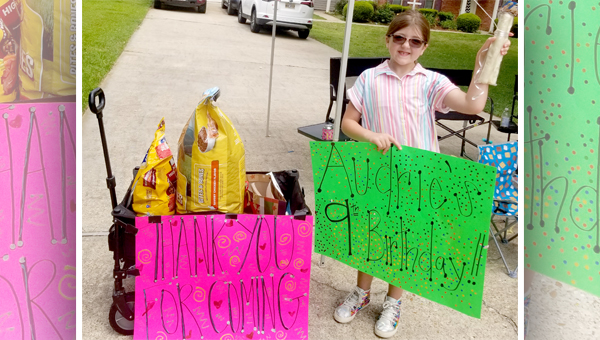 Birthday girl asks for animal shelter donations rather than gifts

One year was nice, but Audrie Quimby is starting her own birthday tradition.

The now 9-year old recently asked friends and family that instead of gifts to celebrate her birthday, she wanted donations for the city of Vicksburg’s animal shelter. And they delivered.

All those who attended her birthday brought gift cards or actual items needed by the shelter. And the timing could not have been any better, as the shelter recently sent out a call, asking the community for much-needed donations, particularly dog food.

This is the second year Audrie, who just finished her third grade year at Bowmar Elementary, has turned her birthday into a drive to support the city’s animal shelter.

Shelter sends out a plea for help

In an article in The Post last week, officials with the Vicksburg Animal Shelter reported problems getting sufficient food to feed the animals at the shelter. It’s a situation that prompted shelter director Kacie Lindsey to take to Facebook with a plea for donations.

And the reason for the problem is reminiscent of the toilet paper rush that hit stores when sheltering in place was recommended as a way to reduce exposure to the virus.

“What happened, everybody overbought (pet food) during the coronavirus,” said Rhonda Henley, manager of Petsense, the animal shelter’s main supplier. “The vendor we get our product from, they ran out of stock at the warehouse. They’re waiting to get more stock.”

She said Wednesday she could have a better idea of the supply when her shipment came in that afternoon.

Lindsey said the shelter uses one brand of food for all the animals to eliminate the possibility of digestive problems, and she buys the food for the dogs, cats, kittens and puppies in bulk from Petsense — 15 bags of each type food at a time.

“And we can only order from certain places. Some suppliers do not take purchase orders, and we have to get an estimate and get a purchase order and then get the food, Lindsey said. “We are not out of food and I don’t plan to be out of food.

“When all this started happening, I went ahead and stocked up because I never know how many animals I’m going to have,” she said. “Now we’re completely full, and I continue to order like I normally do, every week or every other week depending on what our stock looks like.”

Normally, Lindsey said, it takes five days from the time the order is placed for the food to arrive.

She said at one point Henley had to give her all the dog chow in her store because the city’s order didn’t come in. Another time she had to change cat food because there was not enough of the brand the city uses.

So far, she said, the shelter has been getting some donations from residents who have heeded the call.

“I’ve had quite a few people ask when they can drop it off, and I’ve had people order it from other stores and some drop off at Petsense,” Lindsey said, adding and a volunteer goes and picks up the donations.

“I’ve got a better response than I thought I would,” she said.