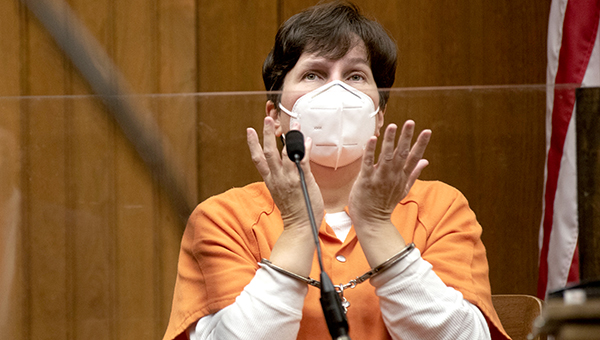 A Warren County woman has been sentenced to 30 years in prison following a sentencing hearing Wednesday.

“We appreciate the sentence that Judge Chaney sentenced her to today,” 9th Circuit District Attorney Ricky Smith said. “I think under the circumstances it is a just sentence for Mrs. Harris. No one deserves to be shot in their bed in the back of the head. She didn’t have to do what she did.”

“He was well prepared and did a very good job,” he said.

Harris pleaded guilty to second-degree murder May 5 in connection to the September 2016 murder of her husband, in which she reportedly shot him in the back of the head during an argument in the couple’s home.

On Sept. 12, 2016, officers were called to the couple’s Smedes Street home about a shooting. As they arrived on the scene, Becky Harris reportedly flagged them down and reported a shooting had occurred inside her home.

Once inside the home, officers found Alfred Harris dead in a bedroom.

Nancy Malone, Alfred Harris’ sister, described his childhood, adding, “We were so close.”

Looking at Becky Harris, she said, “She killed him; shot him in the back of the head. She took it all away from us. He was a good boy, he was a good man.”

Several witnesses testifying for Harris said she had a troubled childhood, moving between family members before living with her father until she was 18 years old.

One witness, Leslie Beckham, was an ex-wife of Stan Harris, said she was married to him for six years. She said he was abusive, recalling times that he pulled her by her hair and hit her. She said Harris also sexually abused her daughters during the relationship. She said she filed an abuse complaint against Harris once in Vicksburg Municipal Court but it was dismissed for lack of evidence.

Beckham said she divorced Harris in 2014, and never heard from him again. She suffered from post-traumatic syndrome disorder and had nightmares because of the abuse she received.

Testifying on her own behalf, Harris recalled her childhood, saying she had been sexually abused by a friend of her father.

She said she met Harris while she was working at International Paper. When they first met, she said, “Life at first was fine; he wined and dined me.”

After marrying Harris, she said, she lost contact with her family and left work to keep house for him.

“Whatever he said, I did,” she said, adding Harris would call or text her periodically during the day, “And if I didn’t answer the phone, I got in trouble.”

She recalled several incidents where Harris abused her, including a day he hurt her while she was recovering from surgery.

The day she shot her husband, Becky Harris said, the couple argued. At some point during the night, he threw her out of the bed and pulled her by the hair to another part of the house and threatened her if she returned.

She said she returned to the darkened bedroom and got into bed on her side, “And the next thing I knew, I saw this ball of fire and I didn’t realize I had grabbed the gun.” Harris said she ran outside, adding she did not flag police down. She called a relative for help, adding she was afraid her husband would come out for her. She said a police officer arrived, saying someone called about a shooting and she was taken into custody.

“I did not intend to kill this man,” she said.

Travis T. Vance, one of Harris’ two attorneys, sought mercy for Harris, asking the judge to consider her early life and the abuse she suffered from her husband.

Southerland asked for the maximum sentence of 40 years.

“Mrs. Harris accepted responsibility, she pled guilty to a second-degree murder charge. She expressed some remorse,” Chaney said before pronouncing the sentence. “We know that the defendant suffered a very difficult childhood.”

But, he said, the presentence report on Harris indicated that while she was a victim of abuse, she also abused people, and she had other alternatives to escape her husband’s abuse besides killing him

The Mississippi State Department of Health Wednesday announced 313 new cases of COVID-19 in the state and 18 additional virus-related... read more