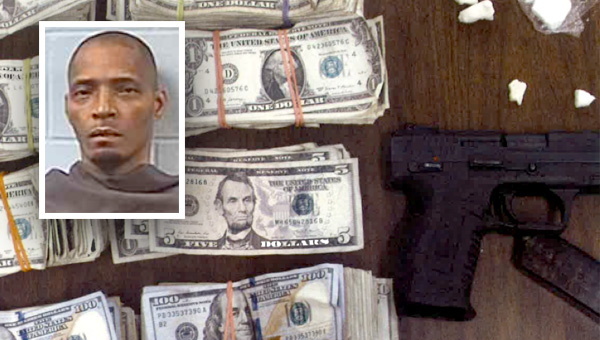 The Vicksburg Police Department announced Friday the results of an early-morning arrest and discovery of drugs, cash and a gun.

Members of the Vicksburg Police Department’s Narcotics/NET Team, the Criminal Investigations Division and the Patrol Division served a search warrant at 159 Beverly Drive in reference to an ongoing drug investigation.

During the search of the house, investigators recovered approximately 13 grams of crack cocaine, $3,400 in cash, a semi-auto handgun and a set of digital scales.

James Ross, 40, was arrested and charged with possession of cocaine with intent. He remains in custody without bond pending his initial court appearance.

Ross will be held without bond pending his initial court appearance Monday.

• On Thursday, at 10:35 a.m., officers responded to the Admiral Apartments, 1200 Mission 66 for a report of an auto burglary. The victim reported someone broke into a 2005 Pontiac Bonneville and stole a Pioneer Bluetooth radio valued at $130, as well as $5 in cash.

• On Thursday, at 12:16 p.m., officers responded to a residence in the 600 block of Popular Street in reference to an auto theft that occurred on Adams Lane. The complainant reported someone stole a 1993 Honda Accord. Vicksburg Police officers recovered the vehicle later in the day.

The Confederate monument at Cedar Hill Cemetery will need the help of a good brick mason after a weekend ‘crash.’... read more