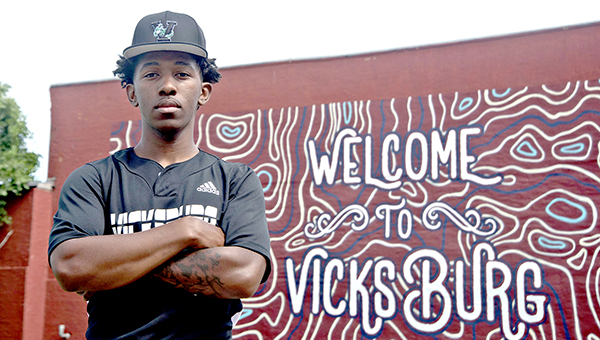 Vicksburg High pitcher Kendrick Bershell is The Vicksburg Post's 2020 Baseball Player of the Year. Bershell had 39 strikeouts in only three starts this season. He is the first VHS player to win the award since 2008. (Courtland Wells/The Vicksburg Post)

Whenever Kendrick Bershell took the mound this season, there was only one way to describe it.

“It was electric,” said his Vicksburg High teammate Dylan Whitfield.

Bershell’s 92 mph fastball blew opposing batters away in droves. He racked up 39 strikeouts in only three starts, and held opponents to a .090 batting average. His season — along with everyone else’s — was cut short by the COVID-19 pandemic, but his brief brilliance was enough to earn him The Vicksburg Post’s 2020 baseball Player of the Year award.

Bershell is the first Vicksburg High player to win the award since Stanton Price in 2008, and ends a nine-year run by Warren Central players.

“It’s good. I felt like I really should’ve had it last year because of the stats and the numbers. But it feels good,” Bershell said. “I always wanted to be The Vicksburg Post Player of the Year because nobody from Vicksburg (High) had had it in a long time.”

It only took a couple of weeks to better those solid stats in 2020.

Bershell started three of Vicksburg’s six games before the season was suspended in mid-March and eventually canceled a month later. He reached double digits in strikeouts twice and went six-plus innings in all of them. Last season, he had one double-digit strikeout game and one start in which he lasted at least six innings in six starts.

“When we first got Kendrick he was topping out at 84, 85 mph. We knew with proper weight training he could increase his velocity. He bought in to what we were teaching,” Vicksburg coach Antonio Calvin said. “Kendrick went from 84-85 (mph) to 92. This kid, the sky is the limit for him. He put his head down and went to work. He became a student of the game.”

Vicksburg lost two of Bershell’s three starts this season, but it was hardly because he was off his game. He only allowed one run in a 1-0 loss to St. Aloysius, and gave up three unearned runs in a 4-1 loss to Greenville. Bershell had seven strikeouts against St. Al and 13 against Greenville.

“We had a lot of confidence in him. We knew he was going to do what he had to do when he was on the mound,” Whitfield said.

Bershell’s best game was in the season opener against Porter’s Chapel Academy. He racked up 19 strikeouts, only walked one batter, and allowed two hits and one run in a 4-1 victory.

“It was kind of cold, but I wasn’t even hearing nothing. I was just pitching. I wasn’t supposed to go over 80 pitches, but the game was too close for me to come out so he kept me in. I was right at 120,” he said.

Bershell was more than just an overpowering arm, however. He did not commit an error at shortstop, and at the plate he hit .471 with two RBIs and six runs scored. He hit safely in five of the Gators’ six games.

The impressive part of Bershell’s stat line is that he felt like he could have been even better.

“I wasn’t really hitting that good. Considering the teams we were playing against, I should have been at .600 or .700. I was supposed to be hitting way better than I was hitting,” Bershell said.

It was a feeling that he and his teammates shared about their season in general. Vicksburg had jumped out to a 4-2 start heading into region play when the season was canceled. It hasn’t won a region championship since 2015, or a playoff series since reaching the MHSAA Class 4A championship series in 2008. Ending both streaks seemed a real possibility this season, but the Gators did not get the chance.

“We would have won district, for sure. Me pitching two Ridgeland games? They wouldn’t have had a chance,” Bershell said with a smile. “We had really just started getting going. We were coming together as a team, hitting the ball better, pitching as a pitching staff better. But we didn’t really have a chance to show it. I think we would have won district this year.”

Whitfield added that the thoughts of what could have been are among the memories he’ll take away from this season.

For Bershell, there is still plenty of opportunities to forget about what might have been and to focus on what still could be. He signed with Hinds Community College in February. He figures he’ll play in the outfield as well as pitch, as he tries to continue carving out a baseball career that’s off to a good start.