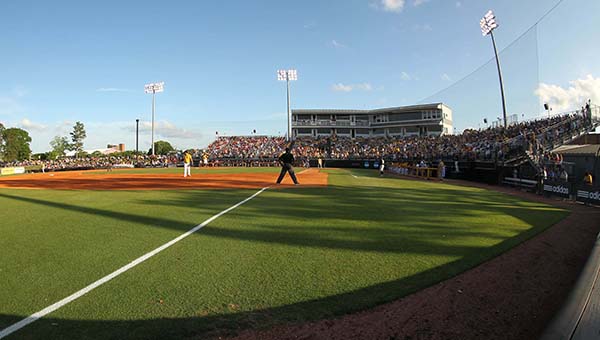 Southern Miss’ Pete Taylor Park is seen during a game. The stadium will play host to the 2022 Conference USA baseball tournament, marking the seventh time it has hosted the event. (Southern Miss Athletics)

The Conference USA baseball tournament is heading back to campus.

After a three-year run at MGM Park in Biloxi, the league announced Monday that the tournament will shift to campus sites for the next three years.

Next year’s tournament will be at Louisiana Tech’s new and yet-unnamed 2,000-seat baseball stadium that is under construction. Its previous home, J.C. Love Field, was destroyed by an EF-3 tornado in April 2019.

Louisiana Tech has not hosted a conference baseball tournament since 2008, when it was in the Western Athletic Conference.

The Monroe News-Star reported that Tech bid $75,000 for the right to host the tournament, and will keep the revenue generated from it.

“What an opportunity for our city, our university and our baseball program to shine on such a regional stage,” Louisiana Tech Director of Athletics Tommy McClelland said in a statement. “Our baseball student athletes have had to overcome a lot the past two seasons and I couldn’t think of a better way of rewarding them for their perseverance than by being the host for the league championships next May.”

The 2021 Conference USA Tournament will mark the first time since 2013, and just the third time since 2009, that it will be played outside of Mississippi. Southern Miss’ Pete Taylor Park has hosted the tournament four times in the past 11 years, Trustmark Park in Pearl twice, and MGM Park from 2017-19.

The 2020 tournament was scheduled to be played at MGM Park as well, but was cancelled because of the COVID-19 pandemic.

The tournament will return to Southern Miss’ Pete Taylor Park in 2022. It will be the seventh time overall that it has been played there.

“Our fans and the entire Pine Belt have always helped to make sure we put on a first-class event. In 2022, we will look forward to welcoming back fans from around C-USA to enjoy our great South Mississippi hospitality,” Southern Miss Director of Athletics Jeremy McClain said in a statement.