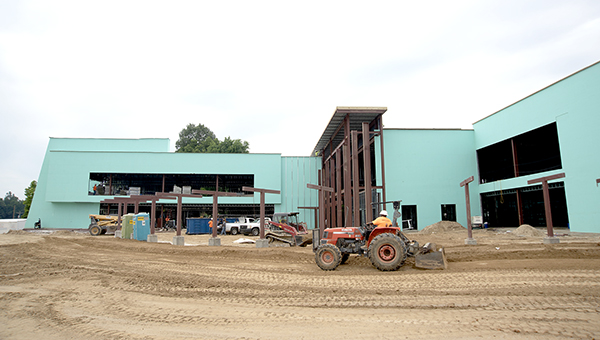 Construction continues on the new Academy of Innovation located at the intersection of Mission 66 and Rosa A. Temple Drive. (Courtland Wells/The Vicksburg Post)

Silver lining: Some school construction projects get ahead with students away

When Vicksburg Warren School District officials closed the schools in mid-March out of concern for the COVID-19 virus, the contractors working on the district’s $131.5 million facilities upgrade project opened the throttle.

Being able to work without having to deal with the school schedules “has helped substantially,” the project’s manager said.

“Specifically at the two high schools, they (the contractors) have been able to make major progress that otherwise would have been limited to summer work,” said Gary Bailey, project manager with Dale Bailey Architects of Ridgeland. “They’re ahead of schedule because they’ve been able to work in the existing buildings.”

Work on Vicksburg Junior and Warren Central Junior High schools is also ahead of schedule, he said.

“So really, every project that has renovations has been substantially improved schedule-wise because of it,” Bailey said.

He said, however, some of the projects have had some COVID-19 issues where contractors had to pull back off projects because illness, “So that’s impacting a little bit but nothing catastrophic at this point.”

Bailey and Jason Stewart, also with Dale Bailey, discussed the renovation projects with the school district’s Board of Trustees at a Thursday evening meeting that was streamed live over the district’s Facebook Page. The discussion included concerns involving several issues at Bowmar Elementary.

Built in 1939, Bowmar Elementary is listed as a Mississippi Historic Landmark.

Because of its designation, work on some areas of the school must be approved by the Mississippi Department of Archives and History, which is requiring the school district to keep the building’s steel windows.

Thursday, Stewart told the trustees the Bowmar project will cost an additional $28,200 for window putty abatement. He said black putty, which contains asbestos, was discovered under several layers of putty when the contractor began demolishing the windows.

“Due to the nature of it, we have to address getting that stuff out, and a lot of it is under the pans of the windows,” he said. “Even if it weren’t covered up (by the putty), it would have been covered up by the metal of the window.”

“We knew some of the conditions (with pipe joints) were there based on exposed piping in the ceiling, but it would have been a pure guess during design to figure out how many were in there,” he said. The money for both projects, Stewart said, is in the contingencies for the renovation.

He added interior demolition is underway at the school and its portable buildings have been demolished.

• Vicksburg High School: work is almost complete with the new gym front addition, which has some interior work to be done and re-roofing.

• Interior work is underway for the concession stand at Warren Central High School, and renovations have begun on the baseball field house.

• Work on Building B at Warren Central and on the ROTC foundation is underway.

• Final inspections for the phase 1 renovations at Beechwood Elementary are expected, and work on phase 2 at Beechwood is expected to be finished within three weeks.

• The Dana Road and Sherman Avenue roofing projects are completed and ready for inspection, and the district will get a total of $50,000 back from savings.

• Work is underway at Bovina and South Park Elementary schools. The interior at South Park is 60-70 percent complete with masonry, and the slab is poured at Bovina for the new addition.

• The building frame for the Academy of Innovation, along with significant other work, is complete. The district is getting a $26,100 credit because some decking material and metal panels will not be used. The money will be applied toward the installation of insulated glass costing $30,600.

“It’s better insulation; looks better,” Bailey told the trustees. “Because this building is so unique we would be better off with a more reflective glass.”

• The contractor is working on the bullpen and outfield wall at Warren Central.

The architects are working to resolve a drainage issue in the outfield, and subgrade problem at the field house building site.

City prepares for another round of street paving

A total of 11 streets in Vicksburg’s North and South wards are expected to be resurfaced under another round of... read more