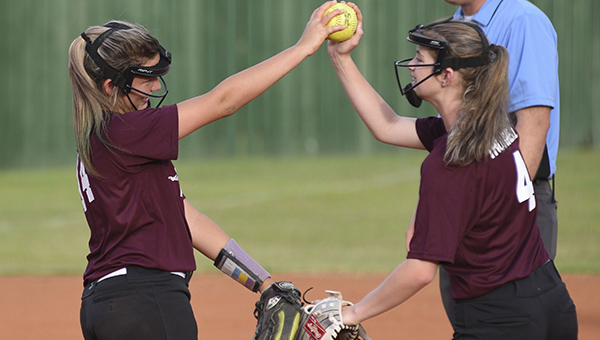 Jackson Heat and Air’s Kyleigh Cooper and Raegan Thornell celebrate during a game against River City Distributors Monday at Halls Ferry Park. The teams were playing on opening night of the Vicksburg Girls Softball Association’s 2020 season, which was delayed 2 1/2 months because of the COVID-19 pandemic. (Courtland Wells/The Vicksburg Post)

The smell of freshly cut grass mixed with the scent of hand sanitizer Monday night at Halls Ferry Park.

Before power hitters took their cuts with the cleanest bats the world has ever seen, power sprayers cleaned the dugouts. And even though the bleachers were taped off, plenty of laughs and chatter among friends and family filled the air as the Vicksburg Girls Softball Association made its long-awaited 2020 debut.

The VGSA kicked off its season, 2 ½ months late because of the COVID-19 pandemic, with five games in three age groups Monday. It was a muted opening day compared to the normal festivities that draw nearly 1,000 people each year, but it was no less a celebration as the first pitches were thrown.

“I’m glad we’re finally out here. The kids have been wanting to play bad,” VGSA president Gary Jackson said. “We normally have a big to-do about it, but there’s just no way this year. We’re going to try to do something at the end of the season, have a day in the park or something for them, but right now we just can’t do anything like that until they say OK.”

For players and parents, the games marked a return to normalcy. They were able to reunite with friends they hadn’t seen in weeks and emerge from a cocoon of quarantine mandated by state restrictions intended to curb the spread of the COVID-19 virus.

Bleachers were taped off to encourage social distancing, but many parents sat side by side in lawn chairs or stood next to each other along the fences.

“I’m glad we’re out here, with everything that’s going on. I don’t think it will hurt anything. It’s nice to see people we know and familiar faces,” said Adam McGahey, whose daughter Bella was playing in a game in the 10U age division. “It feels good to be back to normal. Slowly but surely. The fields look good, I think the girls are having a good time, there’s smiles on their faces.”

Players were indeed smiling. Most teams had had a couple of practices, and some players played in tournaments as state restrictions were eased last weekend. For others, however, this was the first time they’d seen longtime teammates since the pandemic kicked into gear in mid-March.

Although the VGSA’s opening night was one of the first major sports events in Vicksburg since Gov. Tate Reeves lifted bans on large gatherings, it was hardly business as usual. Many restrictions remain in place, and ensuring compliance among fans and players aching for social contact was not easy.

Parents and coaches were given forms as they arrived outlining the VGSA’s policies. Dugouts were extended a few feet to provide room for players to spread out.

Jackson and other VGSA officials sprayed a cleaning solution in the dugouts between games, and passed out hand sanitizer and additional instructions to teams gathering for the next game.

Jackson said the VGSA was leaning on coaches and umpires to enforce the policies, but also admitted that it was difficult to keep people from being people. Despite encouraging social distancing, for example, players and fans occasionally clustered together on Monday.

“We’ve got most of the board out here tonight as field marshals, walking field to field trying to make sure. We’re putting a lot on our volunteer coaches, too, to help us make sure the kids are doing it,” Jackson said. “The coaches can’t do anything with the fans. That’s why we’re here. They’re going to do the best they can with the kids. Kids are going to be kids. If they can, for the most part, keep them separated and keep their hands clean, then I think they’re doing a good job.”

More than 250 players registered for the season before the pandemic, and Jackson said 180 were still signed up for the new opening day.

Considering the season typically ends, rather than begins, by June 1, he called that a success. The revamped schedule includes games on Monday through Thursday nights each week through the middle of July. Each team will play about a dozen games this season.

“That’s real good. We’re hoping to get our numbers back up next year. But I understand that people don’t want to play right now, especially being this late in the game. We’re usually done by now,” Jackson said.

All in all, those involved just seemed happy to break out of the COVID-19 quarantine and get back on the field — no matter how long it took to get there.

“It’s felt like a year,” said Kyleigh Cooper, a pitcher for the Jackson Heat and Air 16U team.

This is part of a series of stories recognizing Warren County’s senior athletes who had their 2020 spring seasons cut... read more