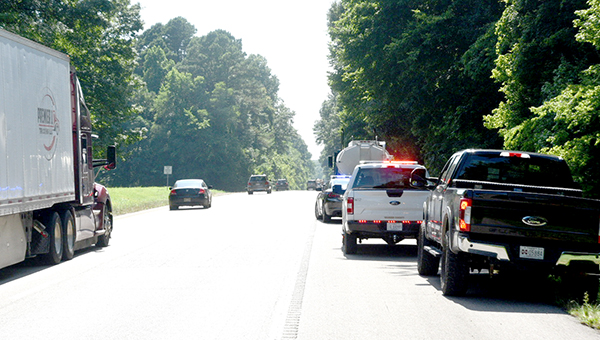 First responders divert traffic away from a tanker truck that was pulled off to the side of Interstate 20 westbound near the 8-mile marker Thursday. Emergency officials also kept individuals away from the scene until the brakes of the truck had cooled down. The tanker was carrying 80,000 gallons of gasoline. (Courtland Wells/The Vicksburg Post)

Overheated brakes lead to traffic issue along I-20 westbound

Traffic along Interstate 20 westbound near the 8-mile marker was slowed Thursday afternoon when the brakes of a tanker truck reportedly began to smoke.

Units were dispatched to the scene, which was first described as a possible tanker fire.

According to Warren County Fire Coordinator Jerry Briggs, a mechanical failure in one of the truck’s axles caused the brakes to overheat and begin to smoke. The driver pulled the tanker off to the side of the interstate.

Briggs said the tanker was carrying 80,000 gallons of gasoline. The truck is currently traveling west under its own power to get off the interstate.

As of last report, the tanker was traveling at about 5 mph to exit off the U.S. Highway 61 North exit where another truck is waiting to take the tanker.

Warren Central High School senior Nathan Mosley had a plan. His plan was to graduate top in his class, and... read more