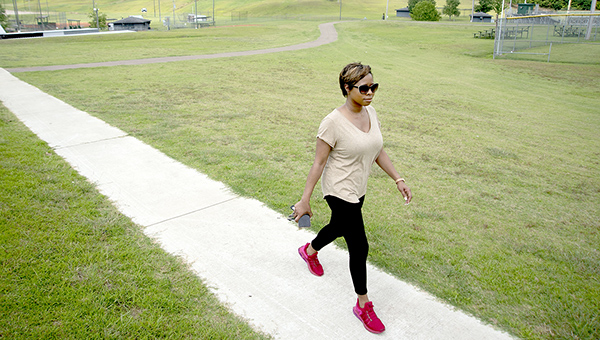 The benefits of taking the trail less traveled

In 2017, the city of Vicksburg opened a walking trail at Halls Ferry Park.

There was a ribbon-cutting ceremony that attracted a crowd. There was then an inaugural walk on the trail that meanders its way around the tennis courts and ballfields at the park.

But in the nearly three years since it was opened, the trail — which is .88 of a mile — has either been forgotten by many or become a feature some never knew existed. City of Vicksburg Human Resources Director Fermika Smith was among the latter.

Smith said she did not know about the trail until talking with Rick Daughtry, the city of Vicksburg Parks and Recreation

Since then, Smith has taken the “extra step” in letting others now about the trail that is among Vicksburg’s many health and fitness assets.

Smith said her department has been working to raise health and fitness awareness among city employees and implement a well-being committee.

“And the walking trail is definitely something I wanted to share with those employees who may not have been aware of it,” she said.

Daughtry said the Halls Ferry walking trail features benches and two water stations, one to allow people to fill their water bottles and another that is handicap accessible.

“The trail is also very safe,” he said.

The walking trail was paid for in part by a federal Recreational Trails Program grant administered by the Mississippi Department of Wildlife, Fisheries and Parks. The grant, which is provided by the Federal Highway Administration, covered about 80 percent of the project, with the city paying the remaining 20 percent.

The city also received a commitment from My Brother’s Keeper to provide amenities like benches, signs and fitness stations along the trail.

As a city employee, Smith said one of her jobs is to advocate for the City of Vicksburg and to take advantage of every opportunity she has to showcase the amenities the city has to offer.

“This walking trail just happens to be one of many gems,” Smith said.

Smith said she plans on using the walking trail and encourages others to do the same.

“This is a great alternative for those who like to exercise outdoors and instead of always using the Military Park, come take a walk at the city’s walking trail,” Smith said. “I think it’s important to have different options and the walking trail is just that — another option.”

Halls Ferry Park, which is located near Home Depot, opens each day at 7 a.m.

A Vicksburg man accused of murdering his wife in 2018 has pleaded guilty in Circuit Court to first-degree murder. Ninth... read more