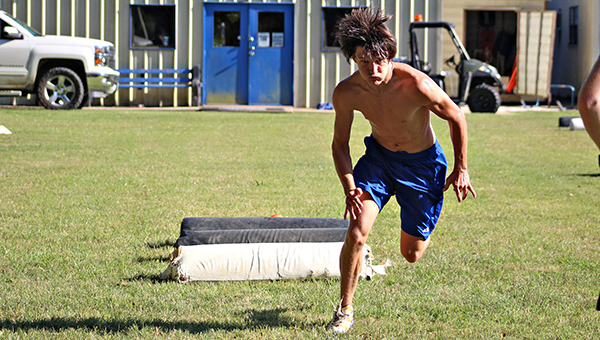 Porter’s Chapel Academy football player Braden Kapp runs through a drill at practice on Thursday. PCA began offseason workouts earlier in the week, marking a return to action after a long layoff because of the COVID-19 pandemic. (Ernest Bowker/The Vicksburg Post)

How do you clean things that are inherently dirty? How do you keep people apart, when they have gathered somewhere to be together? If 20 people are on one part of a facility, and 20 on another, does that count as a gathering of 40 people or only 20?

Those aren’t ancient philosophical riddles. They are serious questions we must ponder in the age of COVID-19, as we restart the sports world in the month of June.

Every governing body, from the youth level to high school to the pros, has laid out guidelines for maintaining the safety of players, coaches and fans as we try to resume our daily life. Some of them seem doable with a little extra effort, like keeping a minimum number of players in the dugout or limiting attendance.

Others are silly, would change the fundamental nature of a game, or are so unrealistic as to make you wonder if the people who crafted them have ever watched a sporting event in their lives.

Take, for instance, the requirement that equipment — balls, bats, uniforms, etc. — be regularly sanitized. If you’ve ever been to a baseball or softball field, especially in the heat of summer, you realize that’s a fool’s errand. Those places are giant dirt pits, where dust flies through the air and sticks to the first thing it finds. All a shot of hand sanitizer will do is make you stickier.

During football season, will we add Lysol timeouts to the heat timeouts each quarter so we can spray down the balls?

If it’s raining, will referees stop the game to sanitize the footballs and then gently set them down in a mud puddle 30 seconds later?

Players are supposed to bring their own water to practice. If they forget, should coaches let them drink from a hose or suffer in the name of public safety?

If you’ve ever smelled football uniforms or catcher’s gear after a couple of practices in 95-degree heat, you’d probably realize COVID-19 is the last disease you’ll worry about catching. Sanitizing items that are infused with sweat is probably impossible after a few uses.

There are also suggestions on how to behave during games. Handshakes and hugs aren’t hard to avoid, but one suggestion by Major League Baseball included fielders and runners maintaining a 6-foot gap between pitches. That would seem to make it difficult to play the game, since keeping a baserunner close to the bag is pretty important. Tag plays would be even more difficult to execute.

MLB also suggested throwing away baseballs after “multiple” people have touched them. How many is “multiple?” Two? Three? Any ball that goes from umpire to catcher to pitcher would apparently need to be thrown away immediately, which would send us into an endless loop of insanity.

Bus trips, a big part of the high school sports experience, are about to get a lot less fun. Traffic and travel budgets are also going to increase exponentially, since teams that used to roll to a game in one bus will now need three. Large bands might bring 30.

Those are just a few examples. There are plenty more that’ll make you scratch your head — or bang it against a wall in frustration.

All of the new guidelines have safety in mind. I get it. If it saves one life and all that. But I also hope we can inject some common sense into them and find some real world tweaks that work, or else we’ll spend more time marveling at the insanity of our new world order instead of the action on the field.

Like they often do, Warren County’s high school football coaches have spent this offseason breaking down their operation and trying... read more