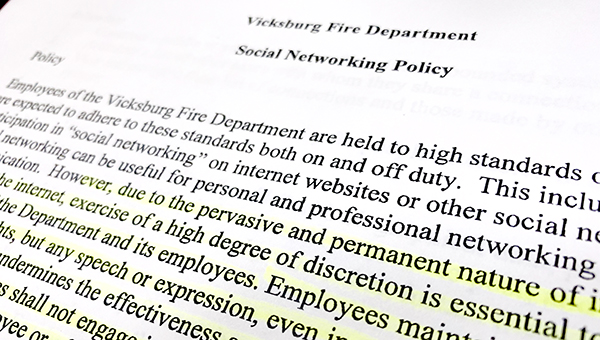 The Board of Mayor and Aldermen will look to amend the city’s social media policy after being made aware of Facebook posts published by Vicksburg Fire Chief Craig Danczyk and an unidentified black firefighter.

The posts by Danczyk and the firefighter were made through their personal Facebook pages, Mayor George Flaggs Jr. said. He said Danczyk’s post was “insensitive and disrespectful and distasteful to a lot of people.”

The post involved protecting his home and family and included the comment, “I got 40 round magazine and (2) ARs.” Flaggs said the post by the firefighter, who was not identified, made derogatory comments toward white people.

“We’re looking at all the posts and whether or not there was any violation of any constitutional provisions; whether or not it violated any of the city’s social media policy,” he said.

Flaggs said the board will discuss the policy in an executive session when it meets Wednesday and again at its June 15 meeting. “It is a personnel matter and we have to deal with it in that manner,” he said.

In August 2018, the board approved social networking policies for city employees with specific policies for the fire and police departments.

Flaggs said based on opinions from outside attorneys, the board will look at the city’s social media policy.

“It is too broad and vague and it has to be more restrictive,” Flaggs said.

According to the city’s social network policy for the fire department, employees maintain their First Amendment rights, “But any speech or expression, even in a personal capacity causing disruption or that undermines the effectiveness and/or operation of the department is prohibited.