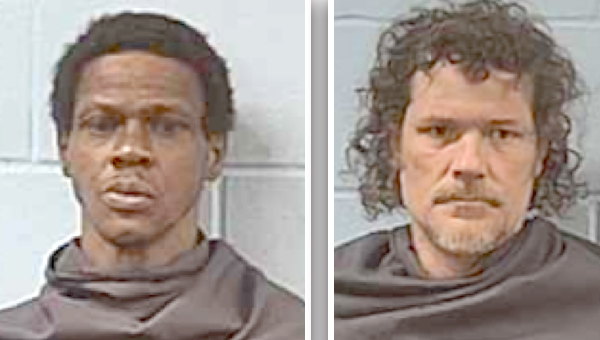 Ricky Sims and Christopher Self

The Vicksburg Police Department announced Monday the arrest of two burglary suspects over the recent days.

On Friday, at 12:50 p.m., officers responded to First East Street in reference to a 911 call reporting a theft that occurred at Armstrong Flooring.

Ricky Sims, 51, of 1203 Second North St., was arrested on one count of commercial burglary.

Sims appeared in Vicksburg Municipal Court before Judge Carpenter on Monday. His bond was set at $15,000 and he was bound over to the Warren County grand jury.

On Sunday, at 6:33 p.m., officers responded to a residence in the 2900 block of Drummond Street in reference to a burglary. Christopher Self, 46, of 1 Briar Lane, was arrested at the scene for residential burglary.

Self appeared before Judge Angela Carpenter in Vicksburg Municipal Court Monday, June 8. He was bound over to the Warren County Grand Jury on a $50,000 bond.

• On Friday, at 11:08 p.m., officers responded to an address in the 2000 block of Royal Street on a call for service concerning an auto burglary. The victim stated someone broke into a 2000 Honda Accord stealing an LG Phoenix 4 cellphone, a Chromebook, a Polo wallet, $7 cash, a driver’s license, a credit card and a book bag.

• On Saturday, at 7:42 a.m., officers responded to a residence in the 1100 block of First East Street in reference to a theft. The victim reported someone stole a Laphan 7000W generator from the construction site.

• On Sunday, at 1:31 p.m., officers responded to the 1300 block of First East Street in reference to shots fired into a home. The resident resported someone shot into her home. Four shell casings were recovered at the scene. This investigation is ongoing.

Make-A-Wish, Junior Auxiliary of Vicksburg come together to make a wish come true