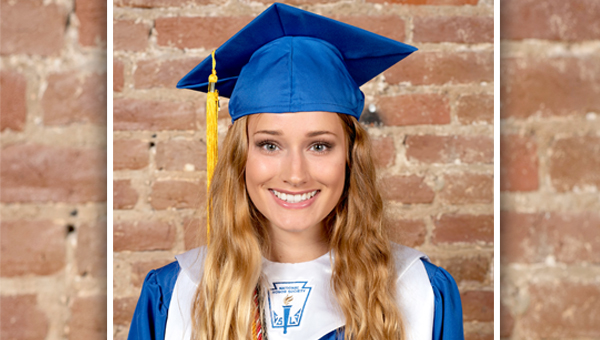 It was no surprise when Maddie Henderson learned she had earned the honor of being named valedictorian for the 2020 graduating class at Porter’s Chapel Academy High School. But while it was no surprise, it did come with a responsibility Henderson was a bit nervous about.

“Our school keeps us informed of our class ranking pretty regularly,” Henderson said. “So I’ve known all year that I was at the top. When I got the official call, though I just thought, ‘Man, I better get started on that speech.’”

Initially, Henderson said, she felt a little “stressed” about writing a speech that should be reflective of the past four years of high school along with encouraging words aimed to inspire her classmates, but once she put pencil to paper, she said, “It ended up not being too bad.”

Henderson said becoming valedictorian of her class had always been a goal.

“I’ve always been a hard-working dedicated student, and I knew it was an aspiration I could make happen,” she said.

Henderson is the daughter of Ty and Tanya McCain.

Henderson was a member of the National Honor Society, student council, varsity track team and Fellowship of Christian Athletes.

She served as the president of Key Club and was captain of the varsity cheerleading squad, which Henderson said was one of her high school highlights.

Henderson plans to attend Mississippi State University and major in animal and dairy science with a concentration in pre-veterinary medicine.

Henderson acknowledged there had been many people who have aided her during her life, but none as much as God.

“Every honor and all successful outcomes in my life are God-given gifts,” Henderson said. “And while there were countless people helping me along the way, I owe it all to Him.”

The Board of Mayor and Aldermen will look to amend the city’s social media policy after being made aware of... read more