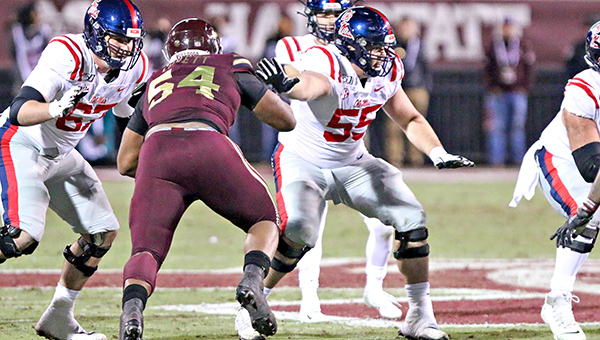 In two seasons at Ole Miss, Ben Brown has established himself as a vital piece of the offensive line.

Heading into the third, the Vicksburg native and former St. Aloysius star is earning a reputation as one of the best in the Southeastern Conference.

Brown was one of five Ole Miss players selected to the preseason All-SEC team by Athlon Sports.

Brown was a third-team selection on the offensive line. The right guard has started all 24 games over the past two seasons and helped the Rebels have the No. 1 rushing offense in the SEC in 2019.

Brown also allowed just one sack in 389 pass blocks, and played a total of 851 snaps. In 2018, he was one of only three freshman right guards in the country to start every game and was named to the SEC All-Freshman team.

“It’s a huge blessing,” Brown said. “It’s very exciting to get the news. Being surrounded by the best teammates and coaching staff in America makes it a lot easier.”

Ealy was a first-team selection as an all-purpose player. He led the SEC in kick return average in 2019, and ranked second in the SEC and No. 5 nationally in all-purpose yardage per game amongst freshmen (100.9 ypg).

Hill was a first-team selection. He led the Bulldogs and finished third in the SEC in rushing in 2019, with 1,350 yards and 10 touchdowns.

Thompson was a third-team selection after leading the Bulldogs with 84 tackles last season.

HAMPTON, Ga. (AP) — After another dominant performance at one of his favorite tracks, Kevin Harvick relished the past and... read more