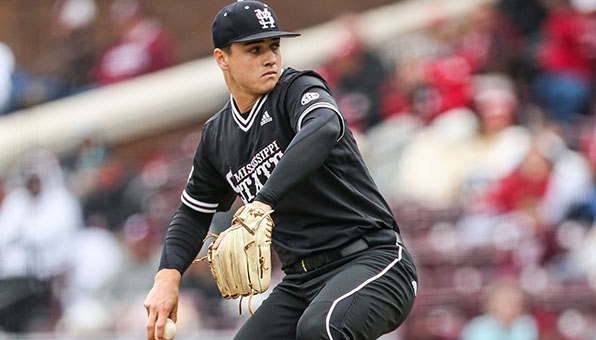 Mississippi State made a little history on the final day of the 2020 Major League Baseball draft.

Pitcher J.T. Ginn was selected by the New York Mets in the second round — 52nd overall — on Thursday, giving Mississippi State a program-record three picks in the first two rounds.

Infielders Justin Foscue (Texas Rangers, No. 14 overall) and Jordan Westburg (Baltimore Orioles, No. 30 overall) were picked in the first round on Wednesday.

Ginn, a Brandon native, was the 2019 National Freshman of the Year when he had an 8-3 record with 105 strikeouts in 86 1/3 innings. He made one start in 2020 before suffering an elbow injury that required Tommy John surgery.

Ginn has a fastball that topped out at 99 mph, and Mets vice president of amateur scouting Tommy Tanous said he envisions the right-hander as an elite starting pitcher.

“This is a rare combination of turbo sink, as we call it, with strikeout ability,” Tanous said. “It’s an out-pitch curveball, an at-will curveball that he throws for strikes. It’s a super athletic kid. He’s got all the qualities of being a top-of-the-rotation guy.”

Ginn was originally selected 30th overall by the Dodgers in the 2018 draft, when he was a senior at Brandon High School. He turned down a $2.4 million offer then, and the slot value for the No. 52 pick this year is approximately $1.4 million.

Mets general manager Brodie Van Wagenen said the Mets have followed Ginn since he was in high school, and believes they’ll be able to sign him.

“There’s history with this player,” Van Wagenen said. “There’s … work that’s been done on him. So that helps. That’s a starting point. Secondly, we recognize that he’s a premium talent and premium talent is going to require real investment in terms of dollars.”

Ginn was the first of five players from Mississippi colleges or high schools picked on the second and final night of the abbreviated MLB draft. The draft was shortened from its usual 40 rounds to only five because of the COVID-19 pandemic.

Servideo went early in the third round, 74th overall, to the Baltimore Orioles. Keenan was picked by the Seattle Mariners in the fourth round, 107th overall.

Ole Miss extended its streak to 32 seasons with at least one Rebel drafted, a stretch dating back to 1989.

Servideo batted .390 with five home runs in only 17 games this season. He hit four homers in his first two college seasons combined. Servideo led the nation in walks (24), was fourth in runs (24), and ninth in on-base percentage (.575).

Servideo is the grandson of Curt Blefary, who won the 1965 American League Rookie of the Year award with the Orioles and was part of their 1966 World Series championship team.

“He really popped up on our radar this spring,” Orioles domestic scouting supervisor Brad Ciolek said. “He got off to a blistering start and ran into some power. We were intrigued by his athleticism in the dirt, how well he moved laterally and how well the hands worked.”

Keenan was leading the Southeastern Conference and ranked third nationally with 33 RBIs when the 2020 season ended. He also hit seven home runs and finished on an 11-game hitting streak.

Keenan hit 31 home runs in his college career, and finished with 137 RBIs in 139 games.

Jordan went to the Boston Red Sox in the third round, with the 89th overall pick. Keith was taken in the fifth round, at No. 132 overall, by the Detroit Tigers.

The 17-year-old Jordan was ranked the No. 42 overall prospect by MLB Pipeline heading into the draft. In 13 games this season for DeSoto Central, he hit .422.

Jordan did not hit a home run in 2020, but belted 19 in his first three varsity seasons and earned a reputation as a fearsome power hitter. He won the 2019 High School Home Run Derby during the MLB All-Star festivities in Cleveland.

Jordan has signed with Mississippi State.

“Quite frankly, we didn’t think he’d make it that far in the draft. He’s a unique talent. A ton of power upside with a good feel to hit,” said Red Sox amateur scouting director Paul Toboni. “He really recognizes pitches early, and he’s doing this all being a year younger than his counterparts, because he reclassified. Just a really exciting talent — there’s really no other way to put it.”

Keith was Mississippi’s Gatorade High School Player of the Year in 2019 and ranked 87th on MLB Pipeline’s Draft list.

“We got a high-ceiling third baseman that we’re excited to get, a left-handed hitter,” Tigers scouting director Scott Pleis said.

When Stacy Sizemore was hired as St. Aloysius’ head coach in February, it marked the start of a new chapter... read more