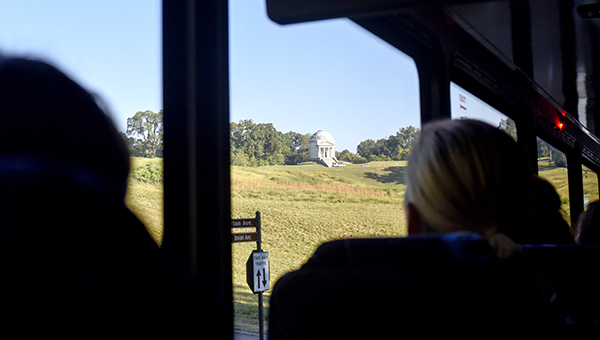 Number of factors being weighed on when, how to open Vicksburg National Military Park

Access to the state’s biggest tourist attraction has been limited since officials with the Vicksburg National Military Park scaled back public access weeks after the start of the COVID-19 outbreak.

Local and federal officials are now working to get the park fully reopened, but the effort involves a lot of parts and the state’s rate of COVID-19 virus cases.

However, Park Superintendent Bill Justice said he has no timeline yet for reopening the park.

“This is going to be a marathon when you look at what the new normal will be in this COVID environment,” said David Vela, National Parks Service director. “We want to do everything we can to make this park accessible.”

He said the positive impact for him is the collaboration of interests involved with phasing in the Park Service’s plan to reopen the park in cooperation with Gov. Tate Reeves’ office and its concerns about the status of the virus.

He said the National Park Service has provided a recovery operations plan at the national level where the decision to open is made by the park superintendent. Justice has a defined strategy he is going to use to reopen the park, Vela said.

“We’re committed to opening the park in a way that is safe for our visitors and our employees,” Justice said.

The park, he said, has never fully closed, saying people use the park daily for walking, running and cycling.

Besides following Reeves’ lead, Justice is getting guidance from President Donald Trump’s Opening Up America guidelines.

“We have to be mindful of the fact that Vicksburg is the most visited attraction in Mississippi,” Justice said. “It’s brought people not only from all over Mississippi but also Louisiana and Texas. So when I look at the trends in those areas, I’m looking at Mississippi and Louisiana primarily and also Texas.

“Every morning I get up, make my pot of coffee and get on the computer and see what the latest (COVID-19) trends are to those states. It’s that important to me it’s one of the first things that I do,” Justice said. “I’m absolutely looking to see if that trend is right enough to make that decision. It’s not daily numbers; it’s the trend, as long you see a downward. We’re not just looking at a number of cases, we’re talking about incident rates, the number of cases per 100,000 people. It’s easily measured across states.”

“We know that Mississippi has now been up by way of cases,” Vela said. “That’s going to be one of the drivers, but at the same time we understand the sensitivities of getting it open sooner rather than later, but we’re going to do it safely. Not only for the visiting public but for his workforce as well.

“We are all on the same page as to the level of concern — how do we get back to some type of regular normal,” Vela said. “There’s no question the visitor experience is going to be impacted.”

The Warren County Board of Supervisors are set Monday to decide on the county’s next road manager following the untimely... read more