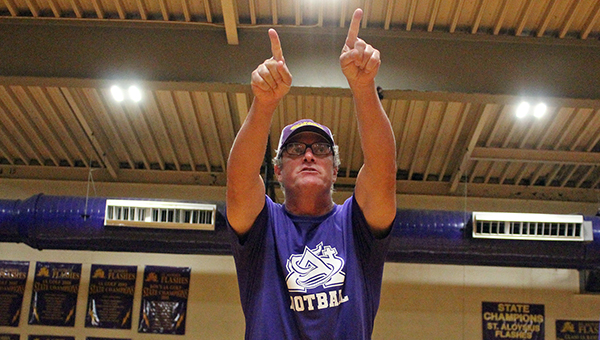 When Stacy Sizemore was hired as St. Aloysius’ head coach in February, it marked the start of a new chapter in the storied 100-plus year history of the school’s football program.

No one expected it to take another four months to truly begin.

The COVID-19 pandemic robbed St. Al — and nearly every other team in Mississippi — of its spring practice period. In the month between Sizemore’s hire and the onset of the pandemic in March, most of the players were tied up with other commitments.

The Flashes finally assembled this week for the start of a summer workout period that will eventually flow into preseason camp. It has been as much of an orientation session as a conditioning period, Sizemore said, as players and coaches get acquainted with each other and reacquainted with the football routine.

Although the lack of a spring practice period cost Sizemore a chance to evaluate his players early on, he said the three-month layoff was not necessarily a bad thing. A number of his players were on St. Al’s baseball, basketball or track teams, so it was a rare opportunity to rest weary bodies.

“It’s not a big deal. At the end of the day, sometimes too much of it can burn kids out. What it did for us is refresh everybody,” Sizemore said. “Especially in a small school, a lot of the kids play different sports. Once they get toward the end of the year, some of them are in their second or third sport and they’re usually tired. They need to focus on their education as well. It’s kind of been a blessing in disguise. It rejuvenated us and our kids. They were able to rest and not worry about going to other things.”

The road to the 2020 football season began indoors. Because of wet fields and rain, players this week have rotated between conditioning drills in the gym and lifting weights in the fieldhouse across the street. They were broken into groups of about 10 each to comply with COVID-19 guidelines handed down by various governing bodies.

The plan is to transition outside when the weather is nice, and eventually begin more football-oriented drills once the conditioning period is over. A preseason scrimmage at Brookhaven Academy is planned in early August — the exact date has not been set — and the season opener is Aug. 21 at Hartfield Academy.

In the meantime, Sizemore will continue to evaluate his players — not just to find potential starters and stars, but to figure out what kind of team the 2020 Flashes will be. Tailoring offensive and defensive schemes to the team’s talents, he said, is a better path to success than forcing them into a rigid and ill-fitting system.

That philosophy, Sizemore added, was critical heading into a season where everything from preseason checkpoints to game and practice operations have been thrown into chaos because of COVID-19 and its continuing effects.