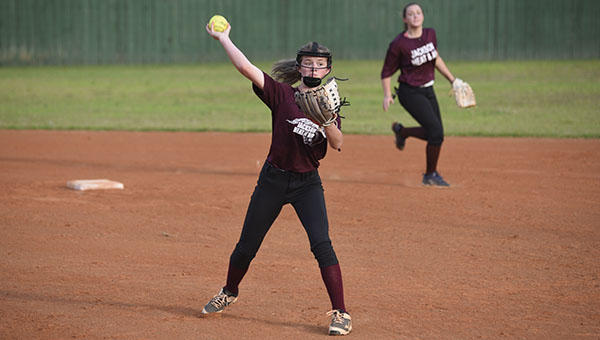 Jackson Heat and Air’s Raegan Thornell throws to first against River City Distributors on opening night of the Vicksburg Girls Softball Association’s 2020 season on June 1. It was one of the first sports events held in Vicksburg since the COVID-19 pandemic in March. (Courtland Wells/The Vicksburg Post)

Sports column: Sports is emerging from the COVID-19 nightmare

In 2020, the sports world has found itself in the middle of a horror movie.

We were all cruising along at a party (the NFL playoffs and Super Bowl), when suddenly a mysterious killer (COVID-19) started picking off our friends one by one.

The NCAA basketball tournament was beheaded by a machete. Poor college baseball was thrown into a woodchipper. The NBA, NHL and Major League Baseball all went off together in the woods and vanished. We’re frantically screaming their names, but it’s not looking great that they’ll be back.

NASCAR drove off for help with squealing tires. We thought it was gone, but it returned in the middle of the night with its friends Korean baseball and Australian rugby to help us fight off the monster.

Finally, dawn is breaking over the horizon and twinkly piano music is playing. Three months after the terror began, we’re starting to take stock of the situation.

The sports world has started to awaken in recent weeks, with college and high school football teams starting offseason workouts, and softball and baseball tournament teams returning to action. The NBA and NHL are calling back from the woods, although MLB is babbling incoherently.

It’s a slow process with a lot of uncertainty still ahead. The threat of COVID-19 still hangs over the world like a pesky storm cloud. Will it pass, or will it dump its unwelcome contents all over us? There is a very real possibility of a dreaded “second wave” of the virus washing over us in the fall, which would be like the horror movie monster awakening from the seemingly fatal blow.

We’ve apparently decided to answer the question as we go. As a people, we’ve decided not to live in fear anymore and take whatever risks are necessary to get the country moving again.

Or, perhaps, we’ve gotten bored of the whole thing and decided to chase the next car that comes down the street. The issues of racial justice and police brutality stormed onto the scene this month and swept away two months of coronavirus doom and gloom like the 1927 Yankees playing a Little League baseball team.

Both of those complex issues have filtered into the sports world as well, from Drew Brees being criticized for recent comments to NASCAR banning the Confederate flag. Diving into it all would take a lot more time and depth than there is in this space, so I’ll steer clear of it for now.

Right now, I just want to enjoy a deep breath of summer air at a ballpark. The COVID-19 monster might not be dead. Every horror movie spawns a sequel, after all. But with the monster on its back, we can at least emerge from a long, dark night and try to live our lives to the fullest, appreciative for the dawn of a new day.

Ernest Bowker is the sports editor at The Vicksburg Post. He can be reached at ernest.bowker@vicksburgpost.com.