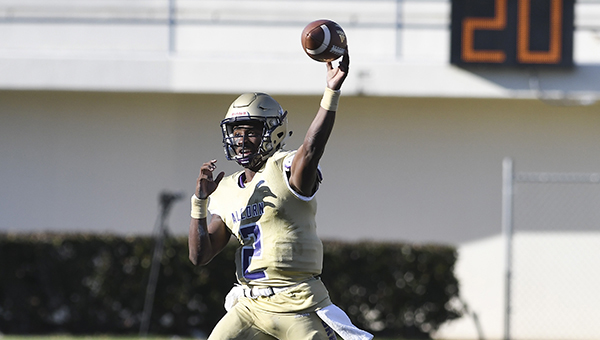 Alcorn State quarterback Felix Harper (2) releases a pass last season. Alcorn State and Ole Miss announced on Thursday that they will play each other in football for the first time. The game is scheduled for Sept. 9, 2028. (Courtland Wells/The Vicksburg Post)

It’ll take a few more years, but Ole Miss and Alcorn State have scheduled a date with destiny on the gridiron.

The two schools announced Thursday that they have scheduled their first-ever football game against each other. It will be played on Sept. 9, 2028 at Ole Miss’ Vaught-Hemingway Stadium.

“This will be a great opportunity for our both our student-athletes and fans to experience the first-ever game between Ole Miss and an HBCU institution, especially one within the state of Mississippi,” Alcorn State head coach Fred McNair said in a statement. “We’re happy to have this opportunity and to continue to strengthen our relationships with the other schools within the state,” said head coach Fred McNair.

Keith Carter, Ole Miss Vice Chancellor for Intercollegiate Athletics, said he and his Alcorn counterpart Derek Horne have been working on the matchup “for quite some time.”

Horne, who was a four-year letterwinner for the Rebels’ basketball team from 1983-86, also spent 15 years in the Ole Miss athletic department as both an assistant athletic director and senior associate AD.

“To play an HBCU from our state is something we’ve been wanting to do for quite some time, and hopefully this will open the door for other meetings with HBCU institutions in the future,” Carter said in a statement. “We look forward to this contest and know it will be exciting for our fans at Ole Miss as well as the fans at Alcorn State.”

JSU’s game with Tennessee State canceled because of coronavirus

The COVID-19 virus has led to the cancellation of a long-running college football rivalry. The Southern Heritage Classic announced Wednesday... read more