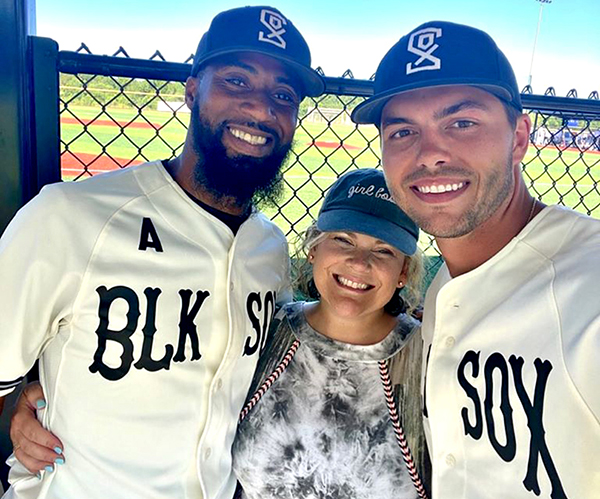 Black Sox set up shop in Vicksburg, will play at Sports Force this weekend

The Hattiesburg Black Sox are making Vicksburg their home for the summer.

The semi-pro baseball team has reached an agreement with Sports Force Parks on the Mississippi to play a number of games at the complex in Vicksburg, team owner Heather Aby said. The schedule includes a three-game series on July 4 weekend, and another this weekend with a top team from Houston, Texas.

The Black Sox will play the West Chase Express Friday at 7 p.m., and then a doubleheader Saturday at 11 a.m. Admission is $10 per day, or $15 for both days. Fans should bring their own chairs — the bleachers will be cordoned off to comply with COVID-19 restrictions — but concession stands will be open to purchase drinks and food.

“It’s great, competitive baseball,” Aby said. “This is one of the teams that we battled against in Louisville in the World Series a couple of years ago. They’re coming all the way from Houston to Vicksburg just to play us.”

The team was founded in 1941 as a Negro Leagues team in Hattiesburg, but now only has the city in its name to reflect its history. The Black Sox are more regionally based in Central Mississippi, Aby said, and have played home games at Jackson’s Smith-Wills Stadium among other places.

The deal with Sports Force Parks was an extension of that, and a way to broaden the team’s reach and appeal.

The Black Sox made their Vicksburg debut last weekend with a series against the Mississippi Stars. They played in a tournament in Arkansas the weekend before that.

“We love it, because it opens up Louisiana for us. We have players in Louisiana, and teams that we play in Louisiana,” Aby said. “For us, 45 minutes is nothing as far as the drive goes. The reception from Vicksburg has been nothing but warm.”

This weekend’s games at Sports Force are among several the Black Sox will play there this summer. They will host the U.S. Military Baseball Team — an independent team comprised of veterans and supporters, but not affiliated with the Department of Defense — July 3, 4 and 5.
The U.S. Military Baseball Team will also host a tryout and showcase on June 30 and July 1 at Sports Force Parks, and a free youth clinic at 8 a.m. on July 3.

Sports Force Parks’ Magnolia Stix summer wood bat league will also start play on June 21. That league is for college players, and games are played on weeknights through July 31.

IF YOU GO
The Hattiesburg Black Sox, a semi-pro baseball team, will play the Houston West Chase Express in a three-game series at Sports Force Parks in Vicksburg. Games are at 7 p.m. Friday, and a doubleheader Saturday beginning at 11 a.m.
Admission is $10 per day, or $15 for the weekend. Fans should bring their own chairs.

It’ll take a few more years, but Ole Miss and Alcorn State have scheduled a date with destiny on the... read more