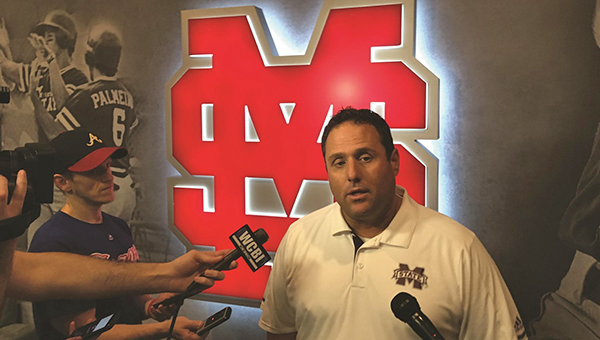 Hours after the NCAA announced that Mississippi would no longer be allowed to host postseason events because of its controversial state flag, Mississippi State baseball head coach Chris Lemonis said it was time for a change.

In a statement released on Twitter, Lemonis wrote that a new design “is needed to unite Mississippi.”

“Our focus as educators, community leaders, husbands and fathers is always to provide perspective. As coaches, we must see all sides of an issue or outcome to help our student-athletes make informed decisions,” Lemonis wrote. “The rulings of the SEC and NCAA affect our kids and community greatly, but we understand their intent. My job as a head coach is to unite our players in a common goal, and a change to our state flag is needed to unite Mississippi.”

Mississippi has the last state flag that includes the Confederate battle emblem: a red field topped by a blue X with 13 white stars.

Southeastern Conference commissioner Greg Sankey announced Thursday that the league would consider banning Mississippi from hosting conference tournaments or championship events if the flag is not changed. No SEC championships are scheduled to take place in the state until 2022, however.

The NCAA went a step further on Friday by closing a loophole in its longstanding policy regarding Confederate symbols. Since 2001 it has barred state with the Confederate emblem in its state flag from hosting predetermined championship events such as NCAA basketball tournament regionals.

Events awarded based on achievement, however, such as baseball regionals and super regionals, were still permitted. Friday’s announcement instituted a blanket ban on all postseason events.

“Competing in an NCAA championship is a special experience for college athletes who compete at the highest level and we are grateful for the college athlete voice leading to this decision,” NCAA President Mark Emmert said in a statement. “We must do all we can to ensure that NCAA actions reflect our commitment to inclusion and support all our student-athletes. There can be no place within college sports where any student-athlete is demeaned or unwelcome.”

“Mississippi’s public universities respect the NCAA’s position as it relates to the State of Mississippi’s flag,” the statement read. “Several years ago, our universities recognized that the Mississippi state flag in its current form is divisive and chose to lower the flag on our campuses. Today, we are committed to continuing to do our part to ensure Mississippi is united in its pursuit of a future that is free of racism and discrimination. Such a future must include a new state flag.

“In keeping the current state flag, Mississippi will potentially forego the millions of dollars in economic impact that NCAA postseason events bring to our state,” the statement continued. “This is unfortunate. Our student-athletes and coaches, who devote so much of their time, talent, hard work and dedication to their sports and our universities, will potentially be negatively impacted through no action of their own. This is more than unfortunate.

The Vicksburg Warren School District will host free athletic physicals on Saturday, June 20, from 8 a.m. to noon at... read more