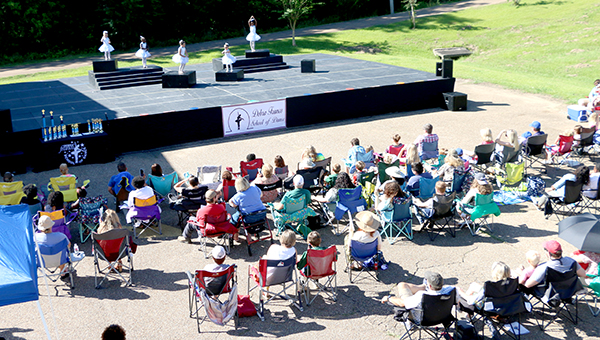 The show must go on: Dancers at the Debra Franco School of Dance hold recital

Re-envisioning has been the name of the game during the COVID-19 pandemic.

Restaurants and retailers found ways to alter how they served their customers, churches held live-streaming worship services and schools transitioned to online classes.

Debra Franco, owner of the Debra Franco School of Dance, also used a bit of creativity and ingenuity when it came to holding her end-of-the-year showcase and dance recital.

In an effort to continue with more than 40 years of tradition, while also practicing social distancing, the event last Saturday was held outdoors.

“The kids had worked so hard, I hated for them not to have a chance to show off what they worked for all year,” Franco said. “And the parents had paid so much money. And, the costumes may not have fit by the end of the summer.”

The ability to hold the recital outside, Franco said, was made possible due in part to the use of the old GymSouth facility that sits next to the dance studio on Wisconsin Avenue.

While social distancing could have been possible for the audience, had it been held at the auditorium or theater facilities, Franco said there would have been no way for the dancers to uphold the six-foot requirement in dressing rooms.

“Luckily, the gym was empty and large enough, so we put down tape every six feet, so the kids were all spread out,” she said, while waiting their turn to perform and for costume changes.

To ensure her students had the necessary equipment to perform, Franco had Billy Powell, who is from McComb and who has in the past done the lighting for Franco’s end-of-the-year showcases, set up and run the lights. Professionals also came in and set up a stage.

Franco said the company All Seasons Events from Jackson, which set up the stage for the event, said they had never set up a stage so big and so far off the ground.

Measuring 42-by-36 feet, Franco said it took the crew 12 hours to set up the outdoor platform, which was about the same size as the stage in the Vicksburg City Auditorium.

Historically, Franco’s dance recitals last several hours. It was shortened this year because of the heat and the bugs.

In addition to encouraging those attending to bring bug repellent, audience members were also called on to provide their own chairs. Tents were allowed if they were set off to the side and ice chests were welcomed.

Even though temperatures over the weekend were a bit milder than in previous days, two performances were held to coincide with cooler temperatures in the morning and the evening.

The younger dancers performed in a show beginning at 9 a.m., while the performance for the older students began at 8 p.m.

Balloons, as well as nature, were used as the backdrop for some of the dance numbers. Trees could be seen in the foreground, Franco said.

Even though this year’s recital was different than those of the past, Franco said she was glad her students had a chance to perform. She said it was important for them to have a sense of normalcy, and have a goal as reasons to continue the classes.

Even though only two-thirds of her students chose to perform in the recital because of the coronavirus, Franco was pleased with the outcome.

“I am so proud of those that stuck with this and reached their goal,” she said.

Even as communities begin to open back up, the threat of COVID-19 remains. And as a continued point of emphasis... read more