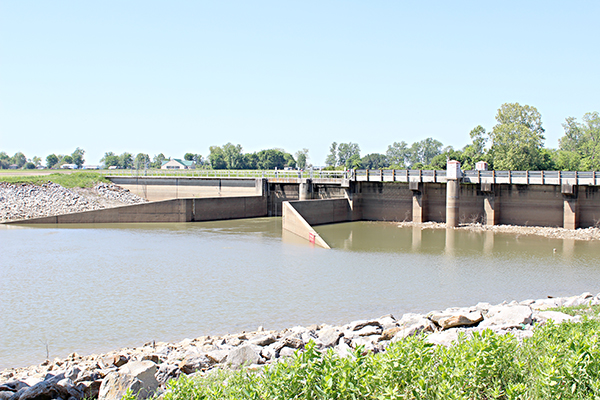 Water levels along the shores of Eagle Lake will be dropping in the coming days as the U.S. Army Corps of Engineers moves to open the gates of the Muddy Bayou Control Structure.

The Vicksburg District announced Tuesday afternoon it would open the gates at the structure “within the next four to five days.”

“Once conditions allow, the gates at Muddy Bayou will be operated to begin a controlled fall of stages at Eagle Lake,” the District said in a release. “As stages at Steele Bayou continue to fall, gates will be opened more to allow the lake to fall at a rate of 0.1-0.2 feet per day. This rate will ensure that minimal damage occurs to saturated banks as the lake level falls.”

The Muddy Bayou Control Structure regulates water flowing into or out of Eagle Lake through Muddy Bayou, a tributary of Steele Bayou.

The drainage structure, which was constructed as a fish and wildlife mitigation feature of the Yazoo Backwater Project, is used by the Corps during periods of high water in the Yazoo River Basin to reduce the risk of damage to the Muddy Bayou Control Structure and to prevent damage to roads and homes surrounding the lake.

“Fisheries biologists with the Mississippi Department of Wildlife, Fisheries, and Parks do not anticipate any negative impacts on fish populations or aquatic vegetation as the lake level falls,” the District said. “The slow fall rate will also minimize the likelihood for a fish kill caused by low dissolved oxygen levels.”

Eagle Lake’s stage is allowed, the District said, to fluctuate between 75-76.9 feet during certain seasons in an effort to improve the lake’s fisheries. The rates of rise and fall of Eagle Lake water levels are dependent on the stages of Steele Bayou and inflow from rainfall and runoff over the Eagle Lake watershed.

If stages permit regulation of the structure, the Mississippi Department of Wildlife Fisheries and Parks establishes the desired rates of rise and fall in accordance with the Eagle Lake Water Level Management Agreement.