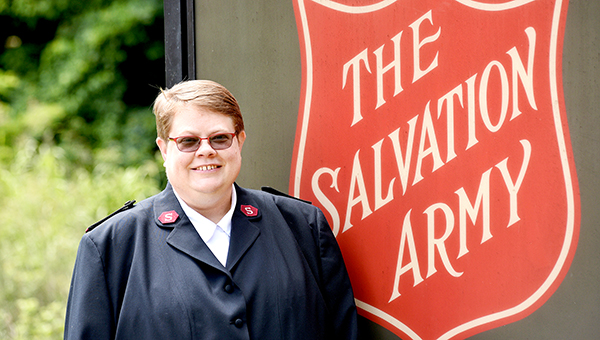 It took a trip from home to help Janna Torgerson find her calling.

But about 17 years ago she was a student on scholarship and on her own at Concordia University in Selma, Ala., and looking for a church to attend.

“I grew up in the state of Washington, so it was my first time being away from home for any length of time. I had been there about a month and the newness and novelty had worn off and I was getting homesick,” she said. “The Salvation Army was right next door to the college. It was in the same block; I didn’t have to cross the street. The first thing the Salvation Army people did in Selma was hug me and welcomed me immediately. I felt instantly at home.”

From that point on, Torgerson said, “I was in the Salvation Army whenever the doors opened and chose to join as a member of the church, which is a soldier, and later on, God called me to be an officer.”

Serving others and providing spiritual guidance is something she was exposed to as a child.

Torgerson was born in Thailand, where her parents were missionaries aligned with the Christian and Missionary Alliance.

Torgerson came to Vicksburg from Baton Rouge, La., where she served as associate co-officer in charge of youth programs.

“The way the Salvation Army works with officers is that we get moved; sometimes more often others, but at the time you arrive at a location you don’t know when you’re going to leave until you get the phone call,” she said.

And when she arrived in Vicksburg, she found the Welches left her a guide to the local center.

“The previous officers leave what we call a brief, which is information about everything that happens on a regular basis; some of the things they’ve done, some of the goals, where to find certain information,” Torgerson said. “You basically jump in and get to work.”

The brief, she said, has helped her over the rough spots “plus I rely on my staff and my volunteers and advisory board and women’s auxiliary to keep up.”

Torgerson said her initial experience in Vicksburg has been very good.

“The people here are fantastic. I have a great crew of volunteers and they’ve been helpful,” she said. “It is different this time for a move because of the coronavirus and the restrictions we’ve had to adhere to.

“So far, we are not able to have church services yet,” she said. “I hope to start that soon, but until we are able to start that, I’m still delivering church to my folks.”

Most of her church members, Torgerson said, do not have instant access to the Internet or Facebook, so she prints out a devotional and some children’s activities “and then I go and visit.”

In the 17 years with the Salvation Army, Torgerson has served in Georgia, Texas, West Virginia, Washington and Louisiana. She also served during multiple disaster relief efforts including Hurricane Katrina and Hurricane Rita.

In Moundsville, W. Va., she served as co-officer in charge, a position similar to the one she now has in Vicksburg.

At other locations, she said, she had been the assistant co-officer or associate co-officer, which she said is similar to an associate pastor position for a church, “But there’s more involved in that because there’s more to the Salvation Army than just the church.”

With the stroke of a pen, Gov. Tate Reeves could send scooters zipping through downtown Vicksburg by the end of... read more