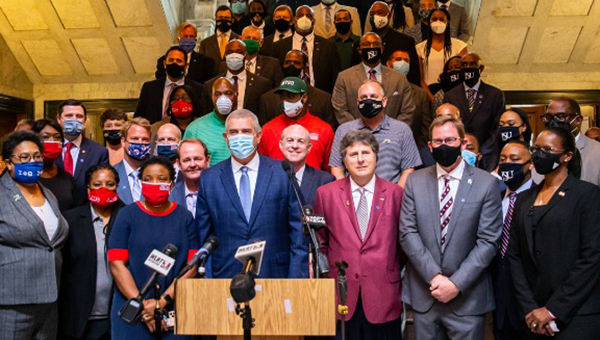 Top education and athletic officials from the state’s universities were in Jackson Thursday to petition state lawmakers, including Speaker of the House Philip Gunn, center, to move forward with changing the state’s flag. Gunn has long been a supporter of making a change to the state’s flag. (Mitch Phillips | Mississippi State Athletics)

Many coaches, but just one message: It’s time for Mississippi to change its state flag

But both Kermit Davis, Jr, the man, and Nikki McCray-Penson, the woman, spoke eloquently and delivered the same message Thursday morning in the Capitol rotunda: Change the Mississippi flag. Now. Let’s move ahead.

Behind the chosen speakers, McCray-Penson and Davis, stood at least 25 coaches and sports administrators representing all the state-supported universities, unanimous in their belief Mississippi needs a new flag to represent all Mississippians.

Football coaches Lane Kiffin of Ole Miss and Mike Leach of Mississippi State, both brand new to the state, stood in the front row behind the podium. At least one observer, this one, imagined Kiffin and Leach must have felt as if they just landed here from another planet, this being 2020 and all this hubbub being about changing a flag that contains the losing battle flag from a war fought more than a century and a half ago. But I digress…

“I know firsthand what it feels like to see a Confederate flag and pretend that it doesn’t have a racist, violent and oppressive overtone. It screams of hate. It hurts me to my core,” McCray-Penson said.

Said Davis, “We’re here to create change. We need a flag that represents all Mississippians. We can all agree on a few things, that we all have great pride in our state, that we all want great business and economic growth in our state, and that we want Ole Miss and our other great universities to attract the very best players from our state as well the best players from all across the country. We can do this by changing the flag now.”

Sports has been front and center in this ongoing Mississippi flag debate, and apparently the pleas of Mississippi’s college coaches and administrators in the past several days have made a difference. On Thursday afternoon, lawmakers told Mississippi Today that they felt they were “one or two votes” short of legislative change in both chambers — an incredible reality given the lack of legislative support the effort had even a week ago.

House Speaker Philip Gunn took the podium after the coaches and spoke loudly and with emotion about the need for changing the flag.

“This entire state is screaming for change,” Gunn said. “This is an issue that needs to be resolved and resolved quickly. The longer it goes, the more it festers and the harder it’s going to be later on. The image of our state is at stake here, ladies and gentleman. The nation is watching.”

Last week, the NCAA, the Southeastern Conference and Conference USA all announced that championship events will be banned from Mississippi as long as the Confederate emblem is part of the flag.

“The rulings by the SEC and NCAA affect us greatly, and we can’t be an elite program without hosting postseason events,” McCray-Penson said. “Our entire student body could potentially be adversely affected by this symbol of hatred. …This symbol of hatred is so much bigger than athletics.”.

Nevertheless, nobody seemed to know whether the legislative votes were there to make the change. Two-thirds majority is needed in both the House and Senate for the change to occur.

“We’re so close,” one legislator said.

“Almost there,” said another.

“I really believe it is going to happen Friday or Saturday,” said still another.

“As a Black woman coaching at one of the most diverse universities in the country, I look forward to seeing change that unites us and accurately represents our great community,” she said. “Changing the flag is an important step toward inclusivity and an end to racial injustice. This is a moment in our society to reassess values and do the right thing by removing this symbol of hatred.”

Davis closed by talking about a family discussion recently at the dinner table at his house.

“I have a daughter, Ally, she’s 32 years and she has Down’s Syndome,” Davis said. “Ally keeps us simplified and grounded at all times at our house. We were having this discussion, my wife and Ally and I, and we were talking about social injustice and the flag change, and Ally’s sitting there and she looks up and says, ‘Dad, do unto others as you would like them do unto you.’

“I said, boy isn’t that simple and isn’t that perfect – that’s it, a flag change that’s good for everybody in our state.”

Rick Cleveland, a native of Hattiesburg and resident of Jackson, has been Mississippi Today’s sports columnist since 2016. A graduate of the University of Southern Mississippi with a bachelor’s in journalism, Rick has worked for the Monroe (La.) News Star World, Jackson Daily News and Clarion Ledger. He was sports editor of Hattiesburg American, executive director of the Mississippi Sports Hall of Fame. His work as a syndicated columnist and celebrated sports writer has appeared in numerous magazines, periodicals and newspapers. Rick has been recognized 12 times as Mississippi Sports Writer of the Year, and is recipient of multiple awards and honors for his reporting and writing.