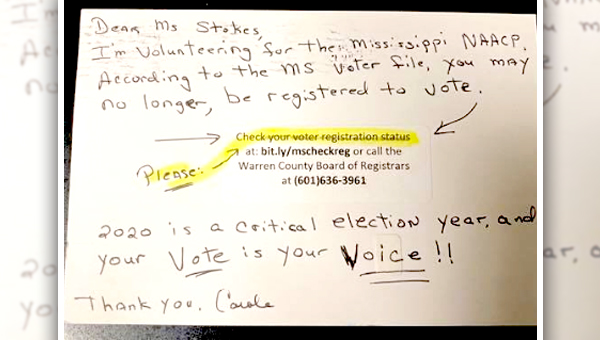 An image of the phony voter cards that have reportedly been sent to residents in Warren County. (Warren County Circuit Clerk's Facebook page image)

Phony cards claiming to be from the NAACP and containing handwritten notes telling people they may not be registered to vote have been circulating in Warren County, election officials said.

The writer of the note, who signed it “Carole,” claims to be working for the Mississippi NAACP and tells the recipient that according to the “MS voter file” they may no longer be registered to vote.

A printed section of the card tells people to go to a website address or call the “Warren County Board of Registrars” and gives the Circuit Clerk’s office telephone number.

“After investigating, we know that the NAACP State Conference and the local Vicksburg NAACP did not authorize mailing nor did the clerk’s office,” Daigre said in a written statement on her office’s Facebook page. “Many of these cards are addressed to deceased people and some never even registered in our County. I am concerned about the intent of this postcard and will continue to investigate.”

Vicksburg NAACP President Bobbie Bingham Morrow said the cards are the work of a prankster.

“We don’t send handwritten notes to people,” Morrow said. “We don’t know who the prankster is.”

Morrow, who gave the voter notice card to Circuit Clerk Jan Daigre, said she also has been getting calls about the cards, which she said have been circulating around Vicksburg. She did not know if it was being circulated in other counties.

She said the originators of the cards “are intentionally pulling up the names of dead people so that it appears that the NAACP is sending out voter registration notices to dead folk and that’s not the case. The NAACP has nothing to do with it. We know that it’s a prank.”

Last year during the governor’s race, Morrow said, someone sent out information that Jim Hood was a Klansman, “So we had to get that information out to let people know the NAACP was not sending that to people. Whoever it is, they’ve got something out for the NAACP.”

If people want to check their voter registration, the Mississippi Secretary of State’s website, “Y’all Vote Ms,” is a good way to check registration or make changes. People can also go to the county’s website: co.warren.ms.us and go to the Circuit Clerk tab.

In 2001, then State Rep. George Flaggs Jr. from Vicksburg was surprised, not necessarily by the outcome, but by the... read more