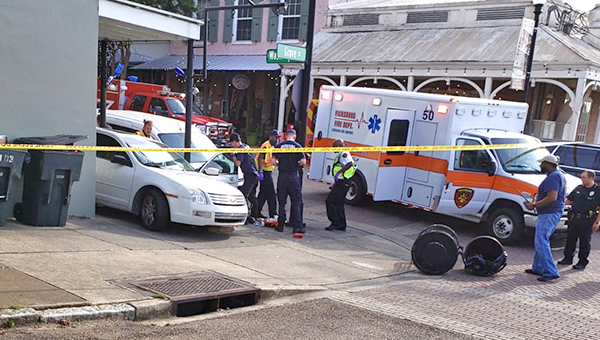 First responders are on the scene of an accident at the intersection of Washington Street and Grove Street. A vehicle has crashed near the building where 61 Coffee is located. One person is injured. (John Surratt/The Vicksburg Post)

One killed in wreck on Washington Street

First responders are on the scene of an accident at the intersection of Washington Street and Grove Street. A vehicle crashed near the building where 61 Coffee is located. One person was killed.

According to Vicksburg police chief Milton Moore, witnesses said the victim was attempting to stop a car from rolling on Grove Street and was pinned between the car and a pole. The wreck is under investigation. Warren County coroner Doug Huskey pronounced Lloyd dead at the scene.

Police identified the man as Jeffery Allen Lloyd, 54, from Auburn, Alabama. Lloyd was visiting family in Vicksburg and at least one family member was on the scene when the accident occurred.

This story will be updated as more details become available.

Drawdown of water levels in Eagle Lake to be accelerated